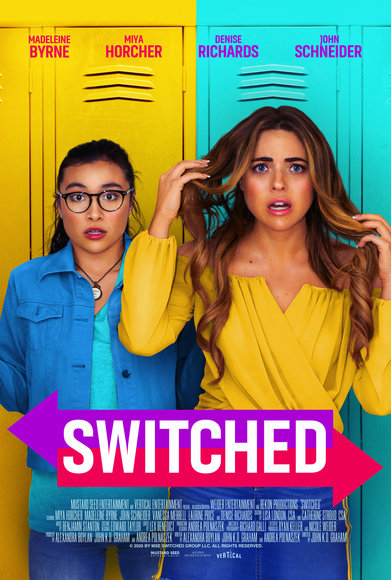 "Tired of being bullied, Cassandra Evans (Miya Horcher) prays that her nemesis, Katie Sharp (Madeleine Byrne), the queen bee of social media, would know what it's like to walk a day in her shoes. Her prayer is answered in an unexpected way when they get Switched."

Trailer won't embed for some reason.

Open to: All, detailed results viewable to: All. Participants: 140

Are you gonna watch Switched?

The Most Dramatic #TheBachelorGOAT in History 😉 Tonight at 8|7c on ABC! pic.twitter.com/xB4M28x3Jz

This season (6th) of The Bachelorette aired in 2010.
Ali was a popular contestant who self-eliminated on Jake Pavelka's season.
A couple of the guys still had girlfriends.
She didn't make her second place guy go to the final rose ceremony.
This is season we got to see Kasey 'Guard & Protect Your Heart' Kahl.

Slutwave, or what some would call slut-pop, is a majestically camp genre of musique that found its prominence in the early oughties, and still sees its influence in the discography of today’s pop stars— though toned down at least 57% from its hey-days.

These tracks regularly cemented the Aryan girl next door’s act of simply being an embodiment of homely innocence, to the action of leaving that innocence right at home. Leaving said innocence at home, without a babysitter, and just enough money for it to order a 1 topping medium-sized pizza.

These tracks show up 4 minutes late to the Uber waiting outside to take them to the closest, sweatiest club that offers free admission with the presentation of their student IDs. They get in for free, but still invite the—more often than not—Black bouncer to come in and spit a verse while they dance like every one’s watching. There’s a lot of nuanced discourse that can expand on just how problematic that is, but we’re still in quarantine, so, let’s talk about that another time.

For now, let’s just pretend we’re all in another plane, dancing in filth while wearing gauche micro-skirts. Let’s believe that everything is fine for a few minutes— it’s called self-care.

1. "I Wanna Be Bad" by Willa Ford feat. Royce da 5'9" (2001)
THE quintessential slut-pop anthem by former pop siren, and current interior designer, Willa Ford. She unfortunately released her LP, the expertly titled Willa Was Here around the time tragedy of 9/11 happened—also her own personal tragedy caused by Nick Carter stans who created hate websites on Geocities dedicated to her because they couldn’t date Nick Carter.

ONTD, what’s a slutwave-y song (from any era) that makes you feel like a video vixen?

-When Annie hit and killed a homeless man on 90210 while drunken driving and had very few repercussions.
"And then his nephew found out and used it to blackmail her into dating him. Eventually, Annie confessed to the crime and got a slap on the wrist for it (a short-lived house arrest that happened between seasons). Yeah, that would never happen in real life."

-When Will suspended Marley for refusing to dress in a revealing, provocative outfit on stage in Glee.

-Eevery time Chuck attempted to sexually assault his classmates on Gossip Girl.
"Chuck Bass gave no shits about consent. First he tried to assault Jenny in the pilot, and then when they did sleep together in Season 3, Jenny 'gave her consent' but actually could not, since she was a minor. She was at literal rock bottom, trying to go to Nate for help, completely alone and intending to 'save' her virginity for someone she trusted. In comes Chuck and he asks her to have sex with him and she agrees. And the first time he and Blair had sex is scarily similar. WOW IT'S ALMOST LIKE THERE'S A PATTERN."

-When Elite glossed over Nadia's racist remarks toward Lu and made them friends.
"Given that Lu never even apologized for her racist treatment of Nadia I think it’s really fucked up that her disgusting behavior was ignored like it never happened."

-When Kelly had multiple relationships with adults as a minor on Saved by the Bell.
"First there was her boss, Jeff, whose lust for Kelly was inappropriate based on two things: age and workplace authority. Then there was her grandfather’s attorney, who was at least creeping into his mid-twenties as he was creeping on a 17-year-old Miss Kapowski. And finally there was Kelly’s cultural anthropology professor."

New Sporkful podcast up now takes you inside the turmoil at Bon Appétit. 6 people who spoke to us asked not to be named for fear of retaliation. pic.twitter.com/Dp3DKdlXvb

After their initial report on the Reckoning at Bon Appétit, The Sporkful released a new episode following up on what's been happening behind the scenes at BA and Condé Nast. I listened to the episode and picked a few choice quotes.

They reached out to 17 members of BA staff for comments. Only 6 people talked but requested not to be named "for fear of retaliation or because of ongoing negotiations with the company. No one agreed to be interviewed on tape."

You can listen to the full episode for more information and discussion here: Source 1
Source 2
Source 3
Source 4
Source 5

What are your thoughts ONTD? I reckon CN is going to recast the TK after the originals leave and hope no one will remember this in a year's time. Instead of, y'know, actually giving a shit about their POC employees.

Netflix Negotiating For ‘The Woman In The Window’ With Amy Adams; Last Fox 2000 Elizabeth Gabler Project Will Be Let Go By Disney https://t.co/CZYhoetzuH pic.twitter.com/kyXrpBlugW

The film is directed by Joe Wright.

It's a Hitchcockian thriller in the vein of Rear Window and Vertigo, with a dollop of Gone Girl and The Girl On The Train thrown in for good measure.

Here’s a very long interview where I talk about An American Pickle, Judaism, Israel, and more! Yay! https://t.co/HoKxwQgALG

Seth Rogen says that while he doesn’t regret his comments on Israel, he thinks some of it was misconstrued.

“I think that it’s a tricky conversation to have in jest. And that’s something that perhaps I now look at and say, ‘Oh, now that we joked about that, perhaps we could clarify some things so people don’t run around thinking that I think Israel shouldn’t exist anymore.’ And I’m sensitive to Jewish people being hurt, as a Jewish person. And I’m sensitive to Jewish people thinking I’m not a proud Jewish person, which I am.

Truthfully, I think my pride in being Jewish and how deeply I identify as a Jewish person perhaps made me feel like I was able to say things without as much context as perhaps I should give them – you know what I’m saying? And I am sensitive to Jews thinking that I don’t think Israel should not exist, and that there are a lot of Jewish people who are alive who wouldn’t be without Israel. And my parents met in Israel; I’ve been to Israel several times.”

More at the source.

Bradley Cooper is in talks to star in Paul Thomas Anderson's next feature, an untitled coming-of-age drama set in the 1970s San Fernando Valley https://t.co/WrUGafub5V

He'll star in PTA's next project. The film is set in the 1970s San Fernando Valley. It's a coming-of-age drama

Chris Hemsworth will be swimming with sharks for a new special for National Geographic's Sharkfest.

Hemsworth will star in a new special called Shark Beach, for the 2021 summer programming block on Nat Geo.

Shark Beach will have Hemsworth consulting with marine biologists, surfers, conservationists, and shark advocates in Australia to uncover the reasons behind increased numbers of shark attacks in Australia. The goal is to find ways for humans and sharks to coexist.

Hemsworth said in a statement to The Hollywood Reporter:

"I’ve spent a great deal of my life near or in the ocean, sharing the same backyard with sharks, and recently there’s been some growing concern regarding an increase in shark activity," said Hemsworth.

"It's crucial that we both revere and respect sharks. Our oceans depend on these apex predators for a biodiverse ecosystem; however, we must also learn how to protect ourselves, and that’s my main objective in Shark Beach."

they have been together since 2004