Your favorite band, 5 SOS, cover Rock Sound, promoting their new album. They talked about a lot of things including their music, fans, and personal lives. + One Direction previewed 5 SOS' new music video at one of their arena shows the other night! Check it out below. 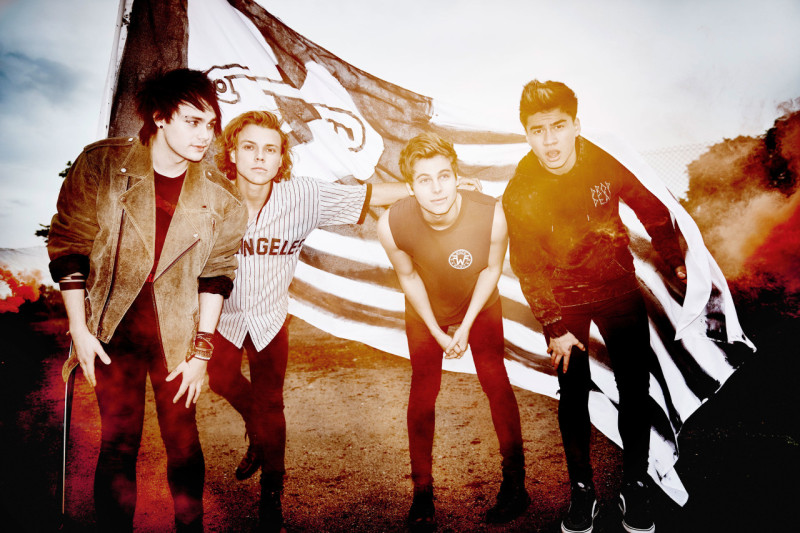 - Michael talks about the time his head caught fire, says he got to the hospital and people asked him for a picture & he said "Any other time but not right now"
- "We're not the type of people meant for stardom. It's just fucking weird having us in the same category as Kendall Jenners and Justin Biebers and shit, media wise. It makes no fucking sense, because we're just four idiots who are naked a lot."
- They inspired Good Charlotte to make a new record while they were writing this one...they're working on it right now too.
- The New Broken Scene is a movement off the new album, symbolized by a broken heart held together with a paper clip....they're saying how they're trying to help some of their fans and give them a place they belong.
- They wanted to make it & get their name out there they took every opportunity they could, including touring with 1D and making more of a pop album for their debut.
- They found their sound with this new album.
- THERE’S DEFINITELY GOING TO BE A TIME WHERE WE TAKE A BREAK, GO OUT INTO THE WILDERNESS AND LIVE NORMAL LIVES. I’D DEFINITELY WANT TO BE A BARISTA OR SOMETHING FOR SIX MONTHS. JUST TO SEE. MY FIRST JOB WAS BEING IN THE BAND, SO I’VE NEVER EXPERIENCED WHAT MY PARENTS WENT THROUGH TO GET ME HERE.” - Calum

One Direction is still supporting their buddies 5 SOS, where they even played an exclusive clip preview of 5 SOS new music video for "Hey Everybody" which should be out shortly.

THEY ARE PROMOTING HEY EVERYBODY ON THE SCREENS OF ONE DIRECTION AND THE SNIPPET OF THE VIDEO pic.twitter.com/ibZ3lbJrUY