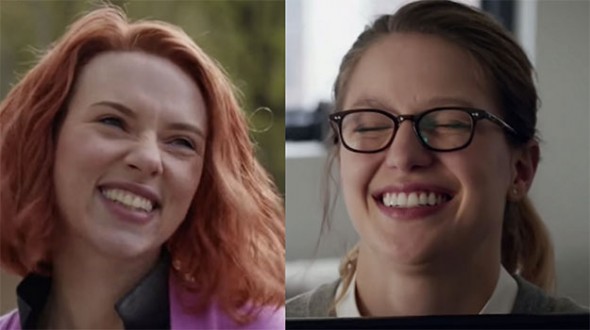 Ohh how we laughed when SNL made a spoof Black Widow movie trailer that was filled with cliche "women" things. We said if Marvel would make one that's probably what they'd do, little did we know DC and CBS had beat them to it with Supergirl starring Melissa Benoist best known as the most yawn worthy person ever on Glee(she does look ok in this admittedly). If we didnt know better we'd think SNL was actually spoofing Supergirl.

Similiarities:
-Both work at some fashion magazine type place with a Devil Wears Prada type of boss
-Awkward/adorkable romantic interactions
-Everything changes when both characters are watching a news report of some crisis happening which involved someone they cared about.


All i've read about the other DC superhero shows is that they are awesome, i can't vouch for this because i don't watch any. However a lot of people who watch them have pointed out that off course the first female super hero on TV (Does Agent Carter count) looks like a parody made by SNL.


Are you excited for Supergirl ONTD?