Some Jokes From Justin Bieber's Comedy Central Roast (Spoiler Alert: They're Not Funny)

"What do you get when you give a teenager $200 million? A bunch of has-beens calling you a lesbian for two hours."
– Justin Bieber humblebragging at his roast 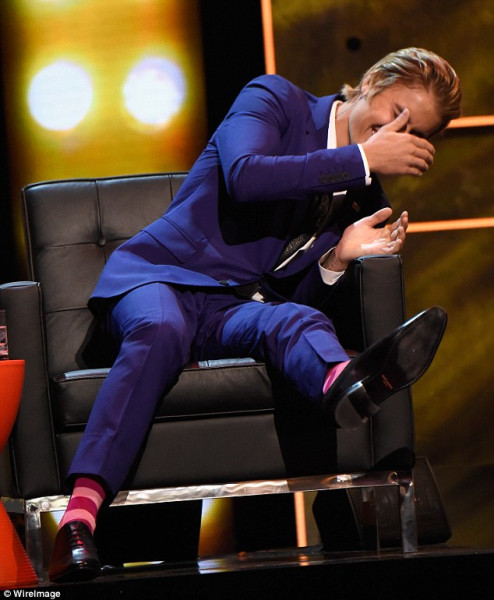 If you were looking forward to Justin Bieber's roast, then look forward to it no more.  The special is set to air March 30 on Comedy Central, but jokes from the taping have already made their way online.  They don't seem brutal or funny at all to me. Even worse, most of the "edgy" insults are aimed at people who aren't even Bieber!

"Is it true you dumped her because she grew a mustache before you?" said Jeffrey Ross about Bieber's ex, Selena Gomez.
"Selena Gomez had sex with [you]... proving Mexicans will do the disgusting jobs Americans just won’t do." (Another Jeffrey Ross zinger.)

More awfulness after the jump.
"Orlando Bloom took a swing at you; you have a perfume called Girlfriend; you threw eggs at a house - not gangsta." - Kevin Hart
"Justin Bieber, the man. Why are you here? ... You are about to get fucked harder than Orlando Bloom fucked Selena Gomez." —Chris D'Elia

"You gotta give it up for Justin. He started from the bottom and he's still a bottom." —Hannibal Buress
"Justin's fans are called beliebers because it's politically incorrect to use the word retards." – Natasha Legerro

"Martha is so old, her first period was the Renaissance." – SNL's Pete Davidson on Martha Stewart

"Justin as a father of six you have to straighten up, son. Last year, you were ranked the fifth most-hated person of all time. Kim Jong-Un didn't rank that high. And he uses your music to torture people." – Shaquille O'Neal

"You acted so much like a pussy on the show that Ellen tried to eat you." —Ludacris

"Justin's life changed when Usher heard one of his songs and liked it, which only goes to prove that Usher ain't black." —Snoop Dogg

And at the end of the roast Bieber did what he intended to do with this roast all along: damage control

"There was really no preparing me for this life. I was thrown into this at 12 years old, and I didn't really know what I was getting myself into. There's been moments I'm really proud of and a lot of moments I look back and I'm pretty disappointed with myself for. But the things that I've done really don't define who I am. I'm a kind-hearted person who loves people and through it all, lost some of my best qualities. For that, I'm sorry. But what I can say is that I'm looking forward to being someone you can look at and be proud of." - Justin Bieber
And one joke that I actually find acceptable:

"... You haven't put out an album in three years. What are you doing? If you listen closely you can hear the sounds of One Direction fucking your fans." —Jeffrey Ross