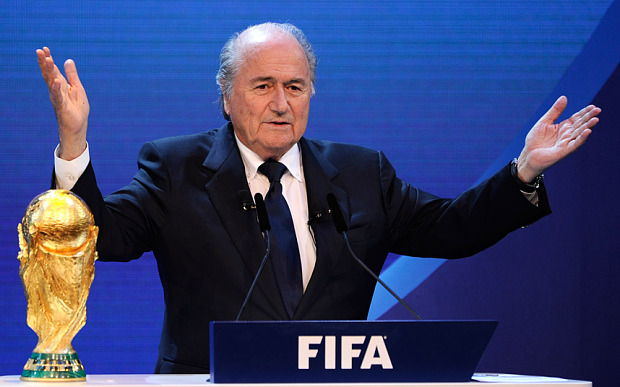 Hell will host the 2026 football World Cup after a Fifa report found “no reason” to overturn the controversial underworld destination’s successful bid.
A 666-page report seen by The Telegraph concluded that Fifa had acted ethically in awarding its showpiece tournament, and suggested Lucifer be compensated with “a really nice wristwatch, one with diamonds and everything” for having been put through an “unnecessary and upsetting” grilling.

- FIFA dismissed criticism over soaring temperatures or the human rights of the damned. "I could spend eternity there", said a FIFA executive.
- There's already a circle in hell where you can listen to vuvuzelas non-stop.
- Who cares if Hell doesn't have a football culture or has never qualified for a WC? It's a new market. You can sell souls there and bring pitchforks to the stadium.
- J.Lo and Pitbull could reprise their Brazil'14 performance at the opening ceremony.
- Lucifer is described by FIFA as "an individual of the highest moral character and an example to the rest of the Football Family”
- The president of the Infernal Football Federation and Supreme Ruler of Hell said that Sepp Blatter "still has so much to teach me before I can make the step up from running Hell to being the Dark Lord of an organisation as demonic and demented as Fifa. He is a constant inspiration"
- Wembley could host the final in the event of hell freezing over.

☆Fun Facts☆:
Gays are accepted in Hell, but could go to jail in Russia and Qatar.
You can drink alcohol in Hell, but not in Qatar.

ONTD, would you go to Hell to watch the World Cup?