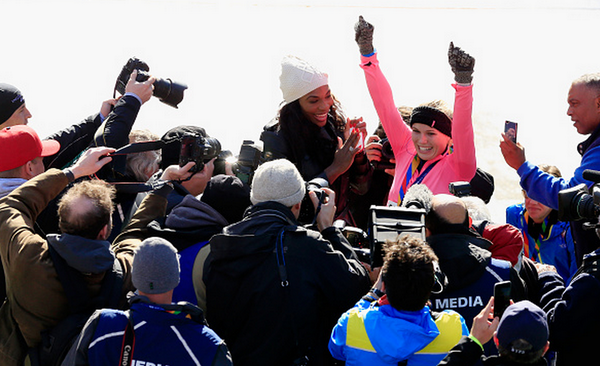 Six months ago, this was planned as the weekend Caroline Wozniacki was to have married golf superstar Rory McIlroy. After a devastating breakup in May, Wozniacki regrouped and enjoyed a terrific second half of the 2014 tennis to finish back in the Top 10 at No. 8. And she capped it off today by completing her first ever marathon, coming in at an impressive 3 hours, 27 minutes in the 26.2-mile New York Marathon.

"The crowd was amazing. It was incredible. It was such an incredible experience. I'm so happy to have done this. I'm so proud. Now I have this medal. I can say that I've done the New York City Marathon. I've even done it at a cool time. So I'm really, really happy."

She was met at the finish line by her friend and tennis rival Serena Williams and the pair hugged.

So proud of @CaroWozniacki wow she's going so fast!

And good friend Serena was there at the finish! Put the medal on Caro! pic.twitter.com/gyIk7nHTgN

Wozniacki was somewhat amazed that she had done so well since she admitted that she didn't really prepare as well as she could have for the race. Her longest training run was 13 miles.

"I think I've done everything you're not supposed to do before a marathon. I had a Halloween party three days ago and came back at like 4 in the morning. Two days ago I chilled a little bit, but I've been really busy."

She also said that she went to the New York Rangers game on Saturday night, foregoing a traditional pasta dinner.

Wozniacki ran each of her first 20 miles in sub-8 minutes. Last night, she watched Rangers-Jets with Serena. pic.twitter.com/Hfz7yBYl4J

Wozniacki had an average pace of 7:53 per mile and her fastest mile of the day was her 22nd. Her marathon raised over $81,000 for Team for Kids, which helps fund marathon organizer New York Road Runners' youth programs. She said that Williams made a big contribution to the charity.

"We raise money for kids who have no - or very limited - access to sports," Wozniacki said about the charity. "We make running groups for them so they can go out and get an active lifestyle, enjoy it and have fun. We also teach them about nutrition and healthy living. All of that has shown a big increase in happiness for kids - they get a healthier body, healthier mind, better grades in school. It all goes together. I think it's such a great charity. And we feel like we have to start early - nowadays we have all the computers and technology, but it's very important the kids still go outside, play and have fun."

Wozniacki left open the chance to run another marathon --her time today is enough for her to qualify for the Boston Marathon-- just don't expect it any time soon.

"Right now I don't think I'm going to do one for a few years, but probably at some point I'm going to do another one. Right now I'm just tired," she said. "I'm exhausted. If you ask me right now, then I'd say no, but I'm sure that I'm going to look back on this experience and say that this was awesome and want to do it again."