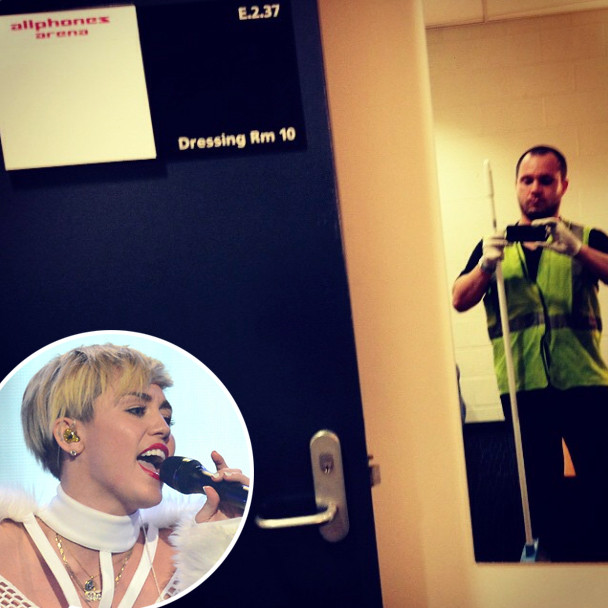 Watch out for the wolf in custodian’s clothing!

Miley Cyrus superfan Anthony Skinner claims to have sneaked backstage after her Bangerz show Friday at Sydney’s Allphones Arena while he was disguised as a cleaner. The 23-year-old club promoter even Instagrammed a selfie wearing the neon yellow safety vest he purportedly wore to get past security undetected.

Skinner tells BBC’s Newsbeat he was in the arena’s parking lot when he noticed a cleaner’s storeroom door was open. “I looked around and on the floor there’s a pair of boots, and on the couch there’s this hi-vis vest,” he said.

“My mindset was ‘See how far you can take this’,” he said. “It wasn’t planned at all. Everything just fell into place so perfectly.”

Skinner put his belongings into “a wheelie bin,” which he then pushed back down the ramp in the loading bay and past a security team he claims “didn’t even look at me.”

“I had that realisation that I was in,” he said. “I just thought ‘Play this cool, play this cool.'”

Skinner tells BBC’s Newsbeat he saw “50 to 100″ staff members taking apart Cyrus’ Bangerz set before he headed to the green room. “There was music blaring from there,” he said. “I could hear it down the end of the hallway.”

So what’d he do from there? “I just started emptying bins, sweeping up the floor and stuff,” says the fan. “I’m cleaning up for about 40 minutes to an hour. Not pretending to clean up, actually cleaning.”

Finally, Skinner says a security guard told him to stand in a doorway as they “surrounded” Cyrus so she could leave the venue safely. “My whole brain just emptied. I saw her and froze. All I could get out was ‘Hey’. She looked at me, smiled and just kept walking.”

Earlier on, Skinner says he gave “pretty much my favorite jacket of all time” to a member of the singer’s tour, who assured him it would be passed along to Cyrus.

“If I did actually meet her I wouldn’t have anything left to do. I’d have to come up with a whole new goal,” he admits.

He tweeted a picture of the note (with his contact details) he planned to give to Cyrus “if I got close enough during the show.”

He tells BBC’s Newsbeat he has not been contacted by Allphones arena. The venue did not immediately respond to E! News’ request for comment.