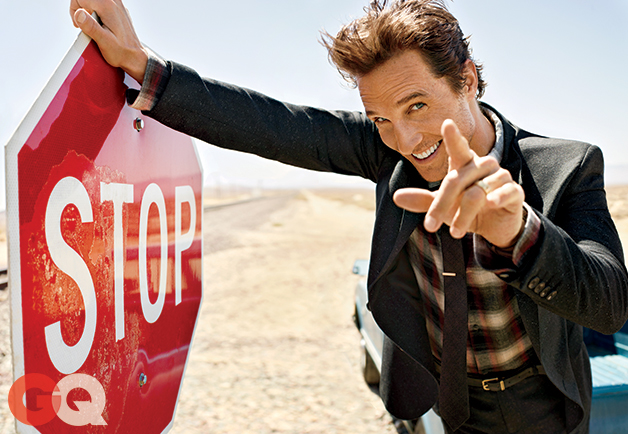 Here’s what the 44-year-old Interstellar actor had to share with the mag:

On the Washington Redskins name (and gun control?): “Man, it's twofold. What interests me is how quickly it got pushed into the social consciousness. We were all fine with it since the 1930s, and all of a sudden we go, "No, gotta change it"? It seems like when the first levee breaks, everybody gets on board. I know a lot of Native Americans don't have a problem with it, but they're not going to say, "No, we really want the name." That's not how they're going to use their pulpit. It's like my feeling about gun control: "I get it. You have the right to have guns. But look, let's forget that right. Let's forget the pleasure you get safely on your range, because it's in the wrong hands in other places . . . It's just... I love the emblem. I dig it. It gives me a little fire and some oomph. But now that it's in the court of public opinion, it's going to change. I wish it wouldn't, but it will.”

On marrying his longtime love Camilla Alves: “I had to get to the point where I saw it as more than just the thing to do. I wanted to really want to. You know, I didn’t want it to be a destination; the fun is that we’re on the adventure together. And look, some of it had to do with her putting it on me. It took her going, ‘C’mon, Big Boy, Mr. Easygoing-We’ll- Get-to-It-When-We-Get-to-It. Either sh*t or get off the pot.’”

On whether he’s still friends with Lance Armstrong: “I like people who are great at what they do. At that time, we were two single men who were doing good in their careers and came from different places. To put my own emotions in front of this and go ‘You didn’t tell me the truth’ would be arrogant. And you know what? This is a friend. Who I know to be a good man. If there was an apology, it was said and I heard it.”

ETA: I included the full quote, which is worse.
Tagged: fail, matthew mcconaughey

i maintain that he peaked as wooderson in dazed & confused

I'm gonna have to start not reading/watching any interviews with him either and just focusing on his roles.


and i hate his god damn car commercials

Yeah, except now we know that the name, like many things that were considered acceptable EIGHTY YEARS AGO, is wrong.

numbedtoe
October 21st, 2014, 07:31 pm
yeah and people were ok with slavery too. and if you want to talk the 30's there matty, people were ok with what happened to the jews and rom in europe. which of course carried over into a catastrophic event in the 40's.

so basically, fuck you matty. the logo needs to change.

ndru03
October 21st, 2014, 07:41 pm
My friend wrote this article, and the mental image of him sitting down and attempting a conversation with McConaughey is cracking me up.

supertex
October 22nd, 2014, 05:40 am
that actually is a csb. what did your friend say about him after this interview?