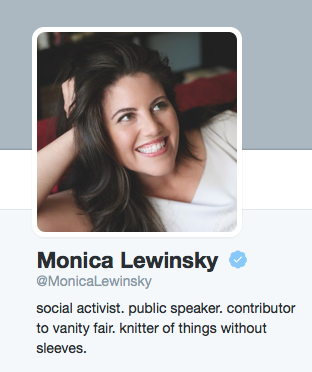 As reported by RadarOnline, Monica Lewinsky has recently made her first public speaking engagement in more than a decade at Forbes Under 30 Summit:

Invited to talk about the “scourge of harassment in the digital age,” Lewinsky, 41, opened her emotional speech with, “My name is Monica Lewinsky – though I’ve often been advised to change it."

“Overnight I went from being a completely private figure to a publicly humiliated one,” she said. “I was Patient Zero, the first person to have their reputation completely destroyed worldwide via the Internet.”

It should be no surprise that Monica's attempts at social media will fish out the trolls and misogynists as exampled in these tweets: 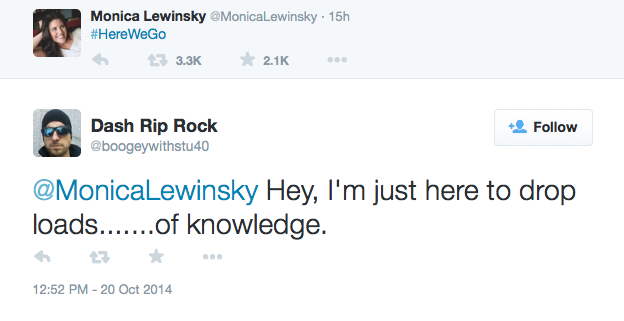 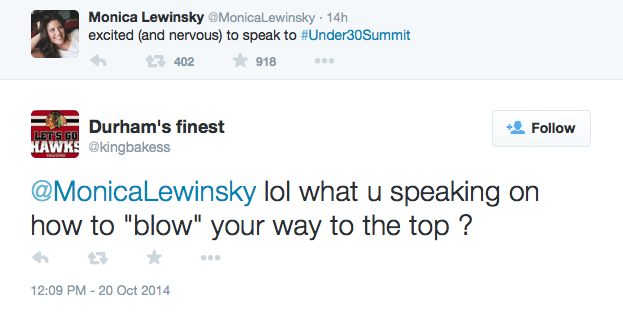 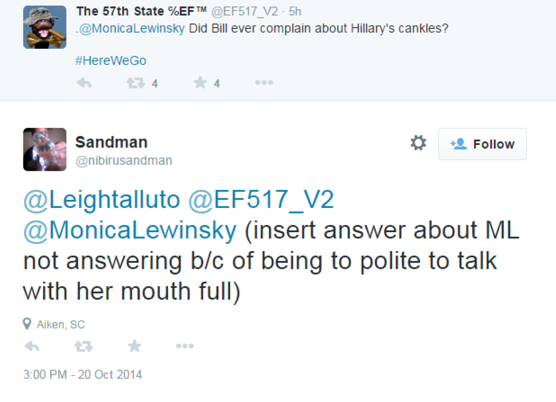 Monica's branch out into the public sphere again is for the purpose of combating cyber-bullying. Here is hoping she gives her twitter to a handler.

crazyventures
October 21st, 2014, 04:56 am
He got impeached ... that's more than George W Bush ever got for deliberately and falsely instigating a war.


Impeachment would literally kick him out of office.
He got away with it. and got to keep his presidency

maishi_obuki
October 21st, 2014, 03:37 pm
for lying. not for actual sexual allegations.
surprise surprise the lawyer lied. And kept his job

diamond_dust06
October 21st, 2014, 03:33 pm
Impeachment is what put him on trial. That's how impeachment works. Had he been found guilty, then he would have been kicked out of office.

"Impeachment in the United States is an expressed power of the legislature that allows for formal charges against a civil officer of government for crimes committed in office. The actual trial on those charges, and subsequent removal of an official on conviction on those charges, is separate from the act of impeachment itself."

crazyventures
October 21st, 2014, 03:48 pm
Two people already told you but he actually did get impeached. The House passed the Articles of impeachment but the Senate didn't convict him.