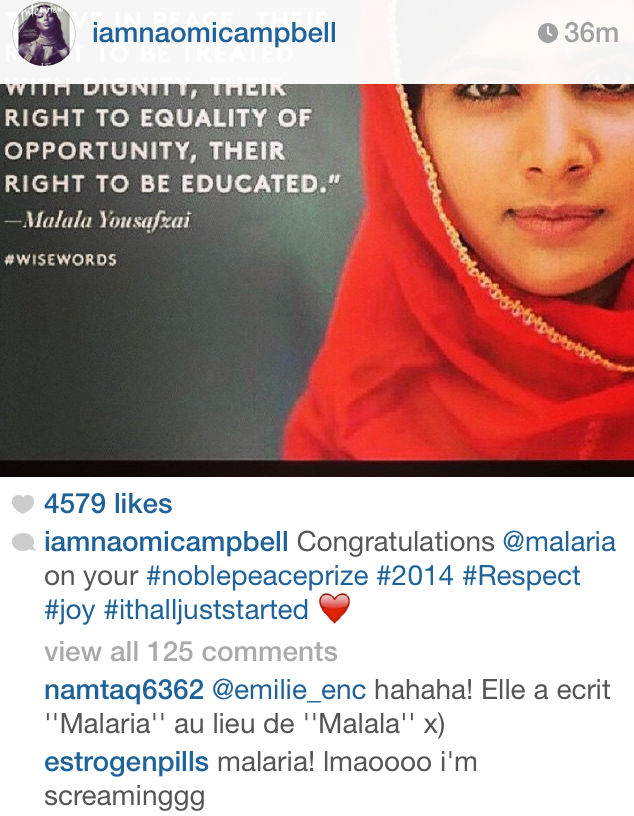 Naomi Campbell has been criticised after she posted a mistake-riddled congratulatory tweet about Nobel Prize winner Malala Yousafzai, in which she called her ‘malaria’.

The catty supermodel’s obviously well-intentioned message to the youngest ever Nobel Peace Prize recipient backfired somewhat when autocorrect apparently changed the name ‘Malala’ to ‘malaria’ which was then followed by the hashtag ‘#ithalljuststarted [sic]‘.

The Twitterverse has also pointed out that Ms Campbell managed to spell ‘nobel’ incorrectly.

While everyone can relate to the struggles of autocorrect, many social media users have questioned whether it would have taken that much time out of the supermodel’s hectic schedule to either check the tweet before posting it or make the change afterwards.

Naomi Campbell is a special kind of human, she tagged Malala as 'malaria' on insta :')

boo delete your last tweet and re-do it you spelt Malala's name wrong you put Malaria instead :( @NaomiCampbell