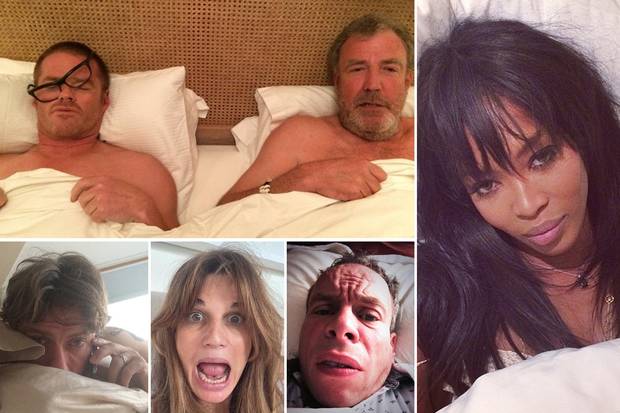 There was the no makeup selfie and the ice bucket challenge, but now celebs are nominating each other for the newest social media campaign: #WAKEUPCALL.

UNICEF are encouraging people to whack out their cameras and take a snap of their crusty eyed fresh-out-of-bed look to raise money for Syria.

Alongside their pictures, Tweeters, Facebooker’s and Instagrammers are posting, #WAKEUPCALL #UNICEF Text SYRIA to 70007 (to give £5) or http://www.wakeupcall.org.uk to encourage others to donate.

Super model Naomi Campbell - who is about to let the public in on her telly watching rituals by starring in Gogglebox - gave us a sneak peak of herself lazing in bed.
Looking as flawless as ever, Naomi wrapped herself up in a white fluffy duvet for the morning selfie.

Model Daisy Lowe was quick to get involved with the new social media campaign and nominated actress Clara Paget, singer Sam Smith and BFF Nick Grimshaw – who shouldn’t find the task too hard considering he’s up bright and early for his Radio 1 Breakfast Show every morning.

Controversial Top Gear presenter Jeremy Clarkson has shown his support by posting a picture of himself waking up topless in bed next to a rather bedraggled looking Heston Blumenthal.

The 54-year-old tweeted the picture of the pair and threatened to post more if people failed to donate to the cause, tweeting: "#WAKEUPCALL SYRIA Unless you donate at http://wakeupcall.co.uk I will post more pictures of Blumenthal and me.”

Hugh Grant must have had a really rough night after attending the premiere of The Rewrite, as the 54-year-old looked to have aged considerably wearing a dressing gown and sporting a wrinkled face.

Comedian John Bishop didn’t look too keen to show his morning face as he poked out from his pillow while taking a phone call earier today.

#WAKEUPCALL SYRIA Unless you donate at http://t.co/XbHKmi3YPh I will post more pictures of Blumenthal and me. pic.twitter.com/n8JmWl4mac