"How to Get Away With Murder" Star Alfred Enoch on Abandoning His British Accent, Emma Watson & More 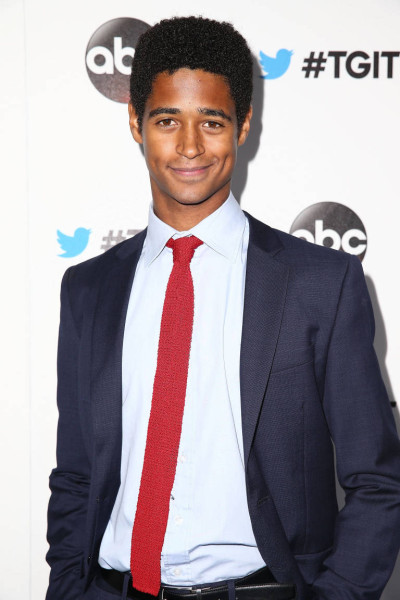 When Harry Potter alum Alfred Enoch gets on the phone, he's without his British accent. He's dropped it, at least for the time being, since signing on to play law student Wes Gibbons in the new Shonda Rhimes-produced show, How to Get Away with Murder. "This is how I talk now," he says. "I'm hoping you'll forgive me — if I don't have to come out of it, I don't."

The series, about a group of law students and their brilliant but ruthless law professor (Viola Davis), is already completely nuts, and it only just premiered last week. (The pilot featured an affair, two murders, and a crazy goth neighbor. It was great.) So far, what we know about Wes is that he's a transfer student, he has no idea what mens rea means, and he thinks it's appropriate to just walk into his professor's house without an invite. (That's how he catches her having the aforementioned affair.) Also, he may have murdered someone with four of his classmates.
Cosmopolitan.com spoke to Enoch about his character and fellow Hogwarts graduate, Emma Watson.

I was really expecting a British accent. At first I thought, "Have I been wrong this entire time? Is he not in fact British?"
It was all a big stunt! When I was like 10, I decided it would look really cool, so I pretended I was British. And I've been doing that ever since.

I guess this explains why your accent on the show is so good.
I just thought to myself, Why wouldn't I practice all the time? I was talking to my girlfriend and she was like, "If you think it's going to help you, why would you not?" The only real reason that I could come up with was that it was just going to be awkward tomorrow morning when I come downstairs and I'm talking differently. But everyone was very tolerant of that and this is essentially all I do now. A lot of people haven't heard me talk differently.

Let's talk about Wes. I can't tell if he's super smart and just less competitive than the others — or if he's maybe not as smart as they are. What's your take?
I would say he's smart. He is definitely not as competitive in this academic sense as the rest of them, but I don't think that means he's what I would call less intelligent. He's less prepared, and less well-conditioned by his previous academic experiences — a lot of the other characters have a pedigree in a sense. They've been high-achieving academically for a long time and they've gone to the best schools and, you know, it's an intimidating place and everyone is well prepared. And he is not. And that extends beyond what we see in that first episode, with him not having done the prep work. He didn't have an academic education whose logical conclusion was Middleton Law School. For everyone else, whether it was a forgone conclusion or not, it was a possibility for them. For Wes, it's a surprise.

What do you think the professor, Annalise, sees in Wes? Does she see potential in him, or is he just her secret keeper?
That is something he is struggling with. That question, What is he doing there? Why has he been selected? And I think he does have potential. One way he is intelligent that distinguishes him from the others is he feels like he's lived, to me. From the moment I read the pilot script, I felt he's incredibly new to this world and has this sort of superficial naivety — but underneath that, he seems to have perspective. Emotionally, morally, he is very intelligent and developed in a way that maybe the other characters aren't.

Did you see Emma Watson speak to the U.N. about feminism?
I didn't … It's something I'm desperately seeking to watch because people have said such great things about what she said and how eloquent she was. That doesn't surprise me at all because she's incredibly intelligent, capable, bright, and eloquent. I'm delighted it went down as well as it did — she talked to the U.N.! That's amazing. [It's] a vital issue and seemingly sparked debate and contributed to it, so that's pretty impressive.
I went to see the premiere of the documentary movie that a friend of mine made, which was a film about women in Egypt called In the Shadow of a Man. It was wonderful and they had a panel at the beginning with a speaker who said fantastically and with a simplicity: "If you believe that men and women are equal, you're a feminist." If you believe that we should work toward a society which reflects that, you're a feminist. It's as simple as that.