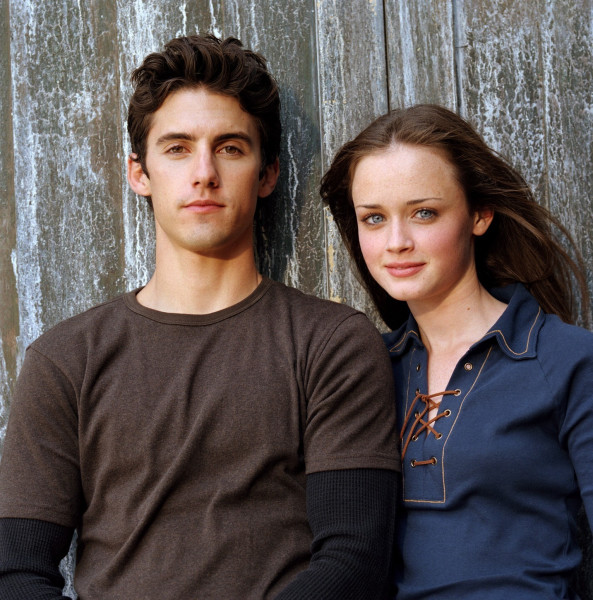 When news broke that all seven seasons of Gilmore Girls were coming to Netflix, the internet freaked. The cult TV show, which was not sufficiently appreciated in its time (only one Emmy nomination...for makeup), started trending on social media, inspiring people to tweet warnings that they were likely to drop out of college, break up with their boyfriends, or quit their jobs in order to relive all the autumn-tinted memories.

Sounds like hyperbole, but this withdrawal from society to live in fictional Stars Hollow is real. Some might say it's just a show, but it's a lifestyle. And now this way of life is about to open up to those who missed it the first time around. Hi, newbies! I suggest starting at the beginning and blazing right through (yes, even through the last two seasons, even though they are terrible). As for all my Luke's Diner regulars, here are the episodes most worthy of an immediate rewatch!

This episode is so epic that even Logan can't ruin it. Rory gets the chance to follow in her idol Christiane Amanpour's footsteps and crack the story of Yale's secret society, The Life and Death Brigade (based on Yale's real-life society Skull and Bones, of which both George W. Bush and John Kerry were a part). A blindfolded journey to the woods leads to a lavish tent village where boys with trust funds speak a language without the letter e. Logan gives Rory pretty things and convinces her to jump from scaffolding in a gown while holding an umbrella and shouting In Omnia Paratus! (a Latin slogan meaning "ready for anything" that's gone on to inspire Gilmore Girls-themed tattoos). This is one of the few times Logan does something good so it's worth celebrating. Meanwhile, back at home, Emily insists on hanging out with Luke so that she can passive aggressively tear him to shreds for being poor and liking beer.

Baby showers are terrible. This is common wisdom. What's even more terrible is having to go to one in honor of your ex's girlfriend, whose pregnancy is the reason you can't be together. This, combined with party games that involve sniffing diapers, sends Lorelai over the edge and inspires her to trash the bathroom. So punk rock. Rory gets in on the troublemaking later when she throws deviled eggs at Jess' new car. No one temper tantrums like a Gilmore.

So much drama over picnic baskets! Stars Hollow holds a charity picnic basket lunch auction, in which women put together cute lunches for men. Obvious gender role issues aside, this episode is great television because all the relationships on the show are shaken up. Dean doesn't bring enough money (loser) for Rory's basket and is outbid by resident bad boy, Jess (teen-girls-bawling-at-Beatles-concert.gif). Town busybody Miss Patty tries to pimp out Lorelai or turn her into a polygamist by sending three different men to bid on her basket. And Jackson passive aggressively refuses to bid on Sookie's basket because she doesn't want to move in with him and later bullies her into accepting a marriage proposal. Consider this episode a lesson in why women shouldn't be auctioned off and how you shouldn't act in relationships (except for the Jess thing; always ditch your boyfriend to hang out with him).

Some people misunderstand reading a book at lunch as a cry for help. In this case, those people are the headmaster and guidance counselor at Chilton, Rory's prep school. They tell her she's a "loner freak" and force her to eat lunch with boring girls who talk about homecoming and are part of a secret club (lots of secret clubs on this show). Lorelai is also scolded for not participating enough at Chilton and is forced to join the booster club. Both of these experiments in becoming more extroverted end spectacularly: Rory ends up being kidnapped in dessert-covered PJs and yelling in the headmaster's face, while Lorelai ends up wearing matching outfits with her mother in a fashion show. You're in, you may leave the runway (*Heidi Klum voice*).

So much of the first half of the series is about Rory's Ivy League ambitions. Lorelai makes a painful deal with her estranged parents to get Rory into a good school that will look good on her college applications, Rory builds a house with a bejeweled hammer to diversify her extracurriculars, they break into some random girl's dorm room, etc. Everything leads down the path to Harvard, and this is the episode where she finds out if she gets in or not! Antsy waiting by the mailbox eventually gives way to the real reason this episode is a classic: a televised meltdown, during which Paris Gellar tells everyone watching CSPAN (like 12 people) that she lost her virginity and explains how sex will ruin your entire life. Preach it, girl.