Rumour: Joaquin Phoenix Out, Ethan Hawke in for 'Doctor Strange'? 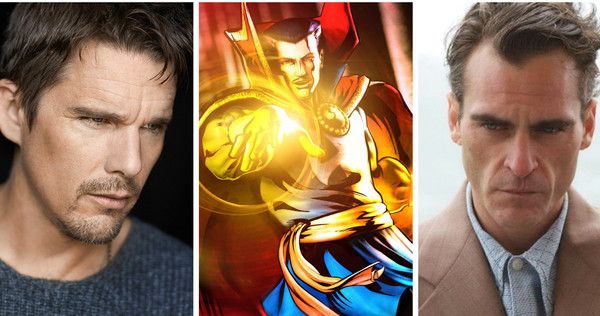 One of these days, Marvel Studios will announce who will play Doctor Strange in their highly-anticipated Phase Three adventure. Until that day comes, all we have are rumors, with the latest unconfirmed report revealing that Ethan Hawke has been offered the title character.

This Is Infamous claims that Marvel wasn't able to come to terms with Joaquin Phoenix, who has been in talks for the role since July. The studio reportedly offered the role to Ethan Hawke on Friday, which he accepted over the weekend, with negotiations currently happening for a six-picture deal.

The report hasn't been confirmed by Marvel, but if it turns out to be true, Ethan Hawke will be reunited with Doctor Strange director Scott Derrickson, following their 2012 thriller Sinister. We reported in August that screenwriter Jon Spaihts has discarded all of the previous screenplay drafts, crafting a new tale that will not delve into Doctor Strange's origins, with Stephen Strange already established as the Sorcerer Supreme. Ethan Hawke reportedly "lands within the right range" for where Marvel wants this character to be when he's introduced in Phase Three.

We reported last month that Joaquin Phoenix is hesitant to sign a long-term deal with Marvel that would include several movies over a number of years. It's also worth noting that This Is Infamous is the same site that claimed Jack Huston and Jon Hamm were contenders for Doctor Strange at different points in time.

Doctor Strange will start filming in May 2015 at Pinewood-Shepperton Studios in London, with the studio aiming for a summer 2016 release. Do you think Ethan Hawke is a good fit as the Sorcerer Supreme? Chime in with your thoughts below.

Doctor Strange is in development . The film is directed by Scott Derrickson.

it's Joaquin Phoenix. Not sure when Marvel will announce but he's the one.