Today in 1955, 24-year-old James Dean died in a car crash on a California highway, but almost six decades later he remains one of Hollywood’s most enduring and enigmatic icons. Here are 3 revealing facts about the man behind the sex symbol. 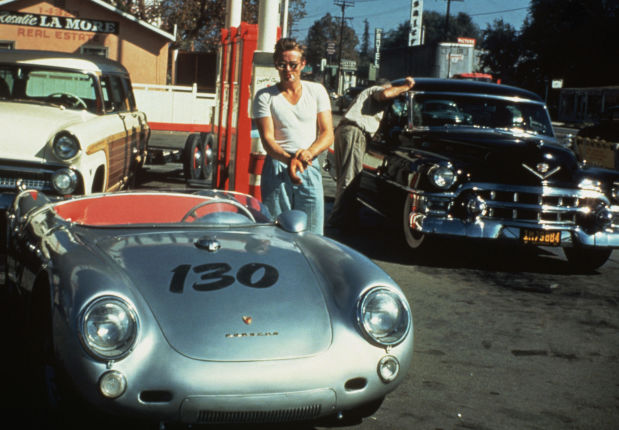 Just hours before his crash, James Dean takes a cigarette break at a gas station next to his beloved silver Porsche 550 Spyder that he named Little Bastard.

It’s almost 60 years after his tragic death and still Hollywood is looking for “the next James Dean.” The young actor made only three movies in his career – East of Eden (1955) where he played the bad boy brother in the “Cain and Abel” retelling, his signature role as an angst-fueled teen in Rebel Without a Cause (1955), and Giant (1956) where he stepped into the cowboy boots of a nonconformist ranch hand. All of his movies became Hollywood classics, but he only saw one, East of Eden, completed.

He was only 24 years old on September 30, 1955, when he was driving down Route 466 in his Porsche 550 Spyder and a car collided with his, killing him almost instantly. The young star's life and career was cut short, but his premature death contributed to the legend he would become. Rebel Without a Cause and Giant were released posthumously, and Dean came to epitomize the sensitive, troubled rebel who fans still connect with today. Who was the man behind the brooding Hollywood sex symbol? Here are 3 revealing facts that might give you a clue.

1. He Looked Up to Brando
Dean respected another brooding actor of the day Marlon Brando. While Dean was just emerging in Hollywood, the slightly older Brando had major success as Stanley Kowalski in A Streetcar Named Desire (1951), his iconic role as a motorcycle gang leader in The Wild One (1953), and he won an Oscar for On the Waterfront (1954). Dean attempted to call Brando and see him socially, but Brando rebuffed his attempts at bro-ship. “I gave him the name of a [psycho]-analyst, and he went. At least his work improved,” Brando said.

2. The Sexuality of the Sex Symbol
Although Dean was briefly engaged to actress Pier Angeli, his sexuality has been a matter of debate. A number of biographers doubt his relationship with Angeli was a physical one. Some biographers believe he was bisexual; others characterize him as a homosexual who had one or two brief affairs with women. It was rumored that his first sexual experience occurred as a teenager when a local minister seduced him.

3. He Confused Ronald Reagan
Before he made it in the movies, Dean worked a lot in live television. A fan of improvising, he went off script on one show and threw a few ad-libs at one of his co-stars, actor and future president Ronald Reagan, who was totally confused by Dean's acting method. Reagan wasn’t the only one who disliked Dean’s spontaneity. "Just make him say the lines as they’re written,” one actor said once.
Source