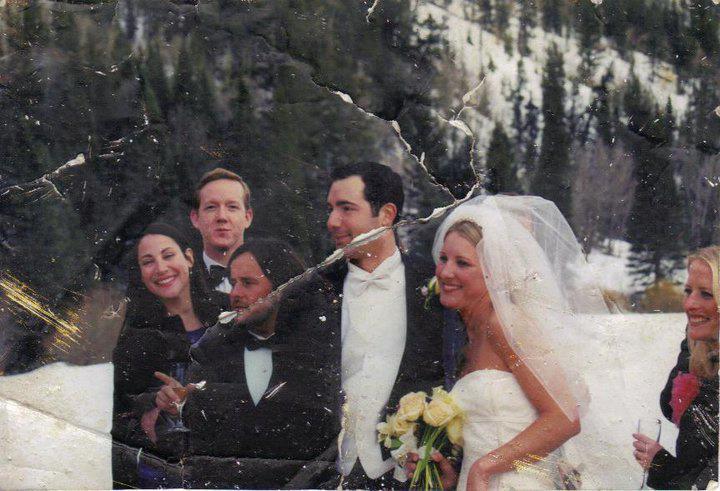 She loved the old photo. It features two smiling newlyweds, he in a white bow tie, she clutching a bouquet of yellow roses. In the company of a few formally attired friends, they’re outside in winter, backdropped by a snow-covered slope.

Until Friday night, Elizabeth Stringer Keefe didn’t know who any of the people in the photo were. She had become its caretaker a few weeks after 9/11, while visiting a friend who was living in Manhattan. She had been trying to identify those beaming faces ever since.

Every year Keefe, an assistant professor at Lesley University, shared the bent, nicked snapshot on social media, hoping someone could make a connection. Each anniversary, a handful of people commented on the photo on Facebook, and a few more shared it on Twitter.

But on Thursday night, Keefe’s humble project suddenly went viral. By Friday afternoon, more than 40,000 people had retweeted the photo, many of them offering help in identifying the people in the wedding party. And Friday night, she finally found out who they are. Happily, none were victims of the 9/11 attacks as she had feared.

A Colorado resident named Fred Mahe stumbled across Keefe’s plea online and contacted her. He’s in the photo, which had been in his desk The man she located was the photo's owner, Fred Mahe, who had it on his desk, on the 77th floor of 2 World Trade Center, when the building collapsed. He hadn’t been in the office on 9/11.

@TakinADigg It is my picture that was at my desk on the 77th Fl of WTC Tower 2. The picture has been kept safe by @ProfKeefe for last 13yrs

“It was an overwhelming conversation,” Keefe said late Friday night. The wedding took place in Aspen, Mahe told her. Some of the participants have been friends since childhood. The bride and groom now live in California.

The photo can now be returned, a small sign of hope from a very bleak day.

“Every year I go dig it out,” she said on the phone Friday. “I’ve been posting it for years, and it’s literally never gone anywhere.”

On a trip to New York just weeks after the World Trade Center towers collapsed, Keefe’s friend handed her a photo she’d found soon after the attacks on the street in the vicinity of ground zero. The friend was moving to California. “Please do something meaningful with it,” she said.

Keefe always stressed that she had no proof the photo belonged to a 9/11 victim.

“I’ve never dismissed the idea that it could just be a photo that was in a neighboring building that had its windows blown out,” she said. “I’ve tried over the years to resist putting a story to it.”

But the photo has a story, a different one than the one she had imagined.

“Either way, it’s a beautiful photo. It’s such a stark contrast to what I saw [at ground zero]. I felt it was worth the effort, if it could ever bring some joy to someone.”

Each year on Sept. 11, she wakes up and wonders how people can go about their daily lives on the anniversary of such a horrible event.

“It just feels so heavy to me,” says Keefe. “It’s stayed alive for me through this project, for lack of a better word.”

She had been sharing the photo on Facebook, Twitter, and Instagram since she joined each social networking service. In 2011, to mark the 10th anniversary of the attacks, she tried posting it on the 11th of every month. Other than a handful of general responses about the kindness of the gesture — nothing.

“It just didn’t catch on,” she recalled. “I was a little more persistent this year, for whatever reason.”

As her computer began humming with activity around bedtime on Thursday, she found herself unable to sleep.

In her area of specialization — she’s in a doctoral program for education at Boston College — Keefe is studying ways that technology can aid people on the autism spectrum. She is as media savvy as her husband is not.

“When I went into the bedroom, he was like, ‘What is going on?’ ” she said with a laugh. In the morning, her young children wanted to know why Mommy’s phone was buzzing off the table.

Now that she has found the people in the photo, she will take it out of her copy of “A Moveable Feast,” by a favorite writer, Ernest Hemingway, where she had kept it near a line in the book that reminded her of 9/11: “When the cold rains kept on and killed the spring, it was as though a young person had died for no reason.”

For Keefe, at least, now the anniversary might now feel a little less heavy.