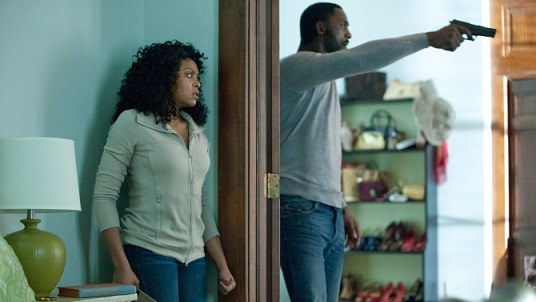 There’s a new “guardian” of the box office.

A newcomer, Idris Elba and Taraji P. Henson’s “No Good Deed,” has finally pushed “Guardians of the Galaxy” off its throne. The Sony thriller opened to $8.8 million Stateside on Friday and is headed for a $24 to $25 million launch that will provide a much-needed boost to the historically low U.S. box office earnings.

Warner Bros.’ “Dolphin Tale 2” was runner-up on Friday, while Marvel-Disney’s “Guardians” is far from out of the game at number three, ahead of Fox Searchlight’s “The Drop.”

“No Good Deed” stars Elba as an escaped convict who terrorizes Henson (a DA-turned-stay-at-home) and her two children in their own house.

The film, which carries a modest $13 million production budget, stands to benefit from targeting under-served African American audiences. It reunites Elba with his “Luther” TV show director, Sam Miller, and “Obsessed” producer, Will Packer, who is also behind the “Think Like a Man” franchise, which stars Henson. Lee Clay co-produced with Packer.

Alcon Entertainment’s “Dolphin Tale 2” kicked past the competition with $4.3 million on Friday. The family film will likely debut to $15 million.

If weekend estimates hold, the sequel will be behind the 2011 original, which opened to $19.2 million, then went on to earn $72.3 million domestic. Harry Connick Jr., Ashley Judd, Morgan Freeman, and Kris Kristofferson return, with Charles Martin Smith back at the helm.

Meanwhile, another newcomer, the late James Gandolfini’s final film, “The Drop,” opened to $1.5 million in limited release. The crime thriller had a solid fourth-place finish and is en route for $5 million this weekend.

Gandolfini plays a bar owner (in the last movie he filmed before his tragic death) whose mob-controlled Brooklyn dive, which serves as a money-laundering “drop” for the neighborhood gangsters, is robbed.

Based on Dennis Lehana’s short story “Animal Rescue,” the gritty crime drama is directed by Michaël R. Roskam and stars Tom Hardy as Gandolfini’s cousin, an ex-con-turned-bartender, and Noomi Rapace.

This year’s box office champ and summer savior, “Guardians of the Galaxy,” made $2 million on Friday to place third after four consecutive wins. It’s set to gross $7.5 million by Sunday and pass $305 million.

“Guardians” is on track to hit that milestone on the foreign front as well as it opened in Japan this weekend, but hasn’t yet entered the coveted Chinese market, where it’s set to launch next month.

Paramount’s sixth weekend of “Teenage Mutant Ninja Turtles” rounded out the top five with an estimated $1.2 million on Friday. The pizza-loving reptiles are on track to earn just shy of $5 million by Sunday, which would raise its cume to $180 million.