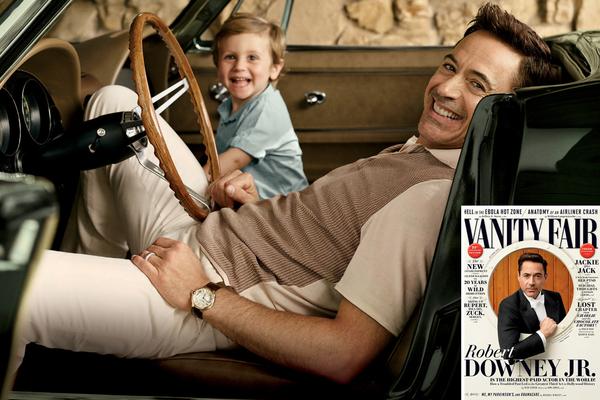 “For some folks it’s just a function of age,” Robert Downey Jr. tells Vanity Fair contributing editor Rich Cohen, on the topic of beating one’s demons. “It’s perfectly normal for people to be obsessive about something for a period of time, then leave it alone.” When asked about the incident in 1996 in which Downey’s neighbors came home to find the actor passed out in their 11-year-old son’s bed, he tells Cohen this was “an uncommon occurrence for me. Happened to be a very public one. I was not a guy who blacked out.”

Talking about his time at the California Substance Abuse Treatment Facility and State Prison and the process of returning to his old life, Downey says, “Job one is get out of that cave. A lot of people do get out but don’t change. So the thing is to get out and recognize the significance of that aggressive denial of your fate, come through the crucible forged into a stronger metal. Or whatever. But I don’t even know if that was my experience. It’s funny: five years ago, I would’ve made it sound like I’m conscious of my own participation in seizing the similarities. But so many things have become less certain. I swear to God. I am not my story.”

This story is featured in the October issue; for access to the full story,subscribe now to Vanity Fair’s digital edition.

Downey tells Cohen he’s probably inherited his addictions, which leads to a discussion on his son Indio, a 20-year-old musician who was recently charged with felony drug possession. “He’s his mother’s son and my son, and he’s come up the chasm much quicker than we did,” says Downey. “But that’s typical in the Information Age; things get accelerated. You’re confronted with histories and predispositions and influences and feelings and unspoken traumas or needs that weren’t met, and all of a sudden you’re three miles into the woods. Can you help someone get out of those woods? Yes, you can. By not getting lost looking for them.” After a pause, Downey adds, “Pick a dysfunction and it’s a family problem.”

Cohen speaks with Downey at his home in Malibu, which not only features a giant R placed in the lawn as well as an animal pen with two goats and some alpacas (which he doesn’t know why he has) but is home to his extensive car collection, which includes a Porsche, a Corvette, and a “Ford F150. Bentley given to me in lieu of back-end payment for Iron Man 3. Volvo. That’s a Woody. That’s a 1970 Boss 302 Mustang. That’s a 1970 Mercedes-Benz Pagoda. That’s my dear friend the Audi, whom I’ve had a lovely relationship with since the first Iron Man. It’s an A8. That’s an Audi R7, arguably one of the greatest cars ever made. That’s a Mercedes-Benz wagon. That’s the 2011 VW GTI.” When Cohen asks Downey whether this is a post–Iron Man collection, Downey says, “Are you kidding? Before that, I didn’t even have the GTI.”

On Iron Man, The Avengers, and the resurgence of Marvel Comics, Downey tells Cohen, “I’ve gone from being convinced that I am the sole integer in the approbation of a phenomenon to realizing that I was the lead in the first of a series of movies that created a chain reaction that, if everything didn’t fire the way it was supposed to, there’s no operator, no anything. And you go, O.K., life is doing something here that included me but did not require me. But, yes, that role means a lot. Marvel is kind of like this sacred brotherhood.”

Downey talks to Cohen about The Judge, the first feature film by Team Downey, the production company he and his wife, Susan, started together: “It was the least likely first Team Downey project, but there was something in the process that was so provocative. I’d find myself tearing up during every work session, because of constellations being lit by the subject matter, this idea of going home, what it is to return, fractured relationships, the drama of it. It was a big experiment—with Susan’s cred and my bit of leverage. How do we do it when we get the opportunity? O.K., here’s all the rope, guys.”

Downey tells Cohen he is “really looking forward” to the baby he and Susan are expecting, and shows Cohen the latest addition to his car collection: a Honda Odyssey. “If I’m gonna have two of ’em in car seats then I gotta be ready,” he says. 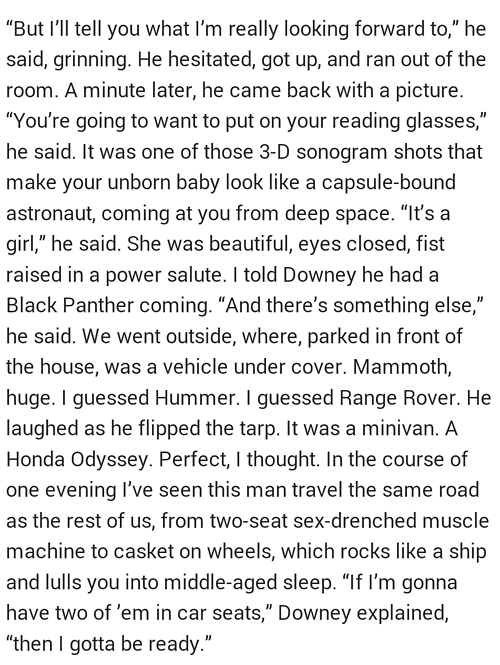 In a video interview on VF.com, Downey says, “The other funny thing about doing these genre action movies is you don’t want to be the tubby guy,” revealing he does kung fu, strength training, Qigong, and Tracy Anderson. When asked about his food weaknesses, he replies, “Ice Cream. Cheeseburgers. Listen to me. I want a cheeseburger. I want bacon on it. I know I’m not supposed to. I want a lot of cheese. I want Thousand Island. I might even put some Mulberry Street Pizza pizza oil on it. If I could eat whatever I wanted every day, I would have Domino’s pizza with pasta carbonara inside every slice. And at night I would have Neapolitan ice cream until I felt absolutely toxic. And then I would drift off telling myself, ‘It’s going to be O.K. . . . It’s going to be O.K. you’re going to train in the morning.’ ” 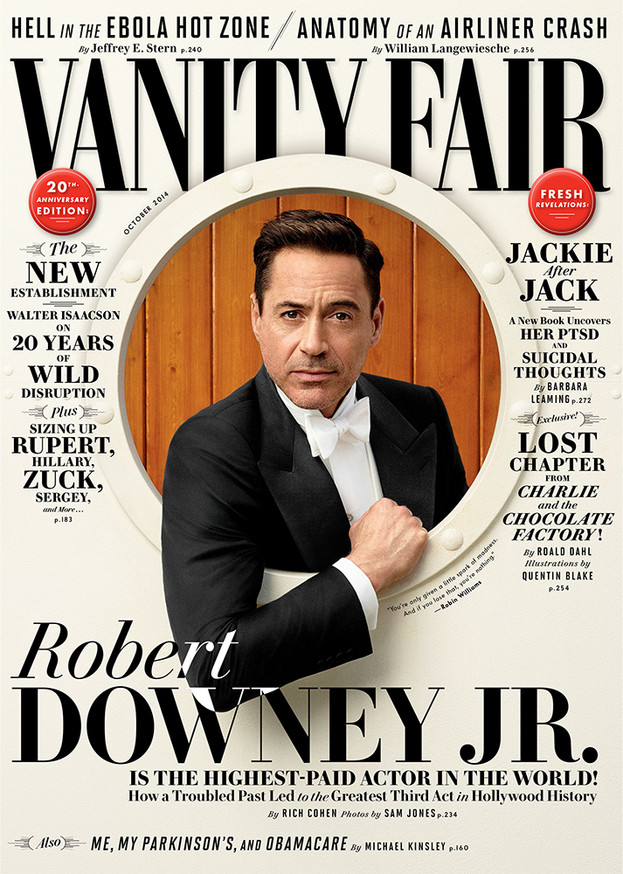 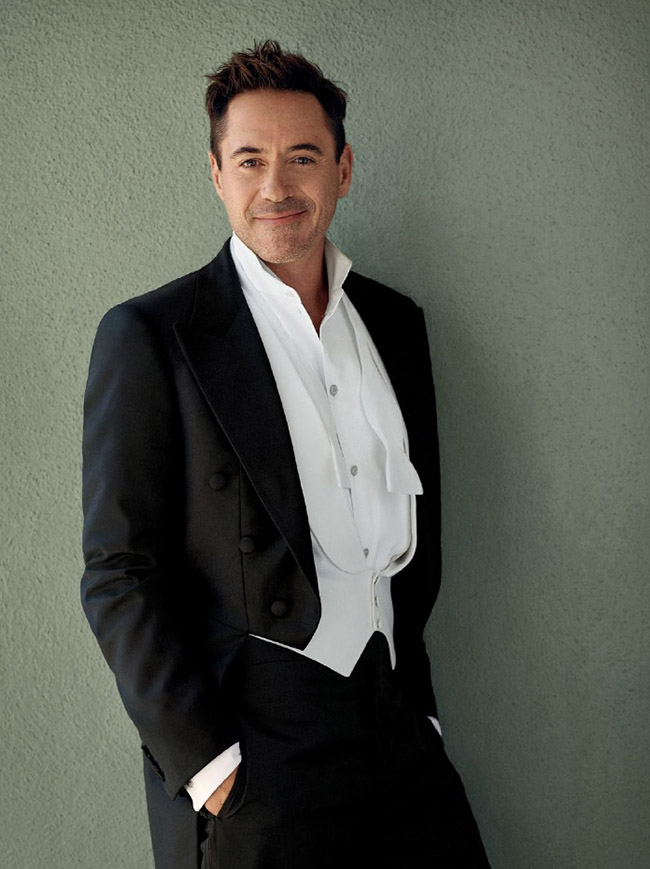 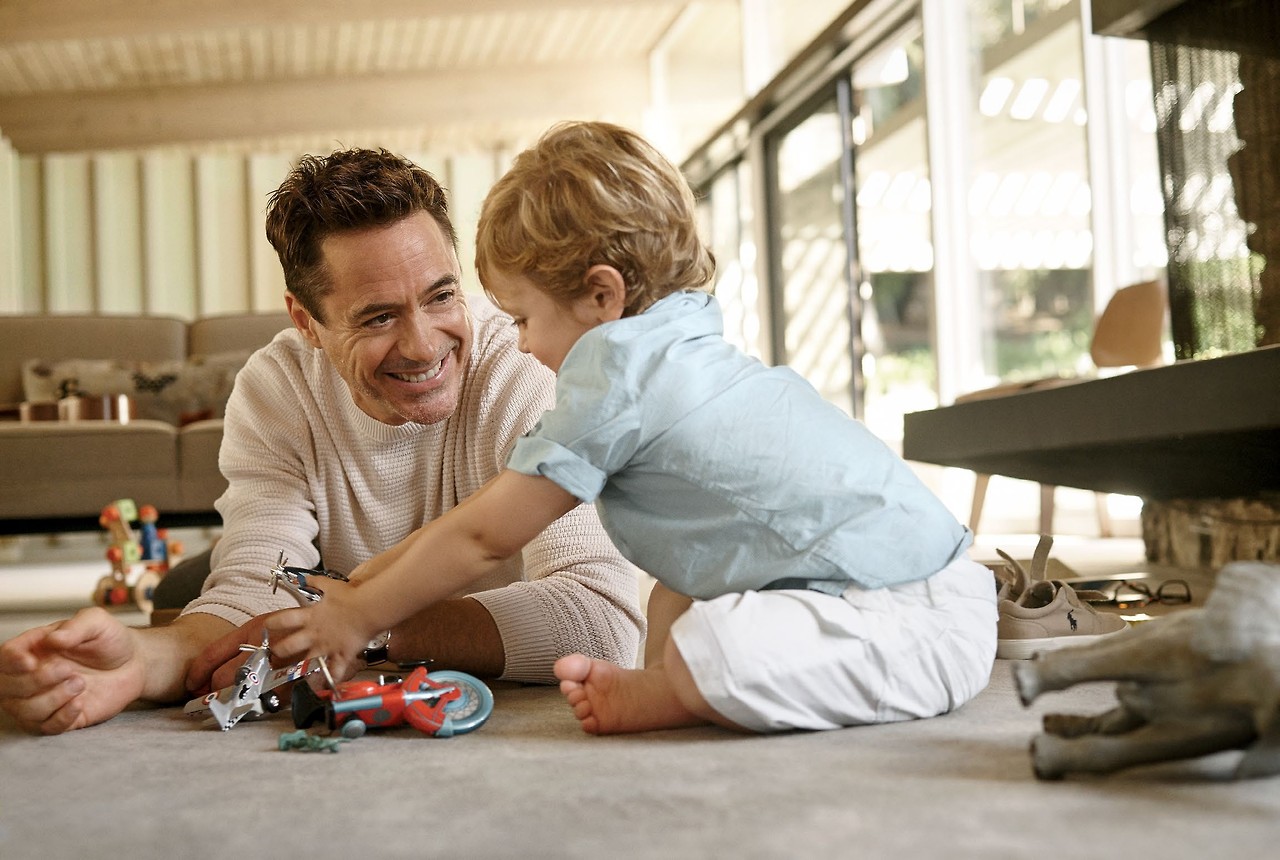 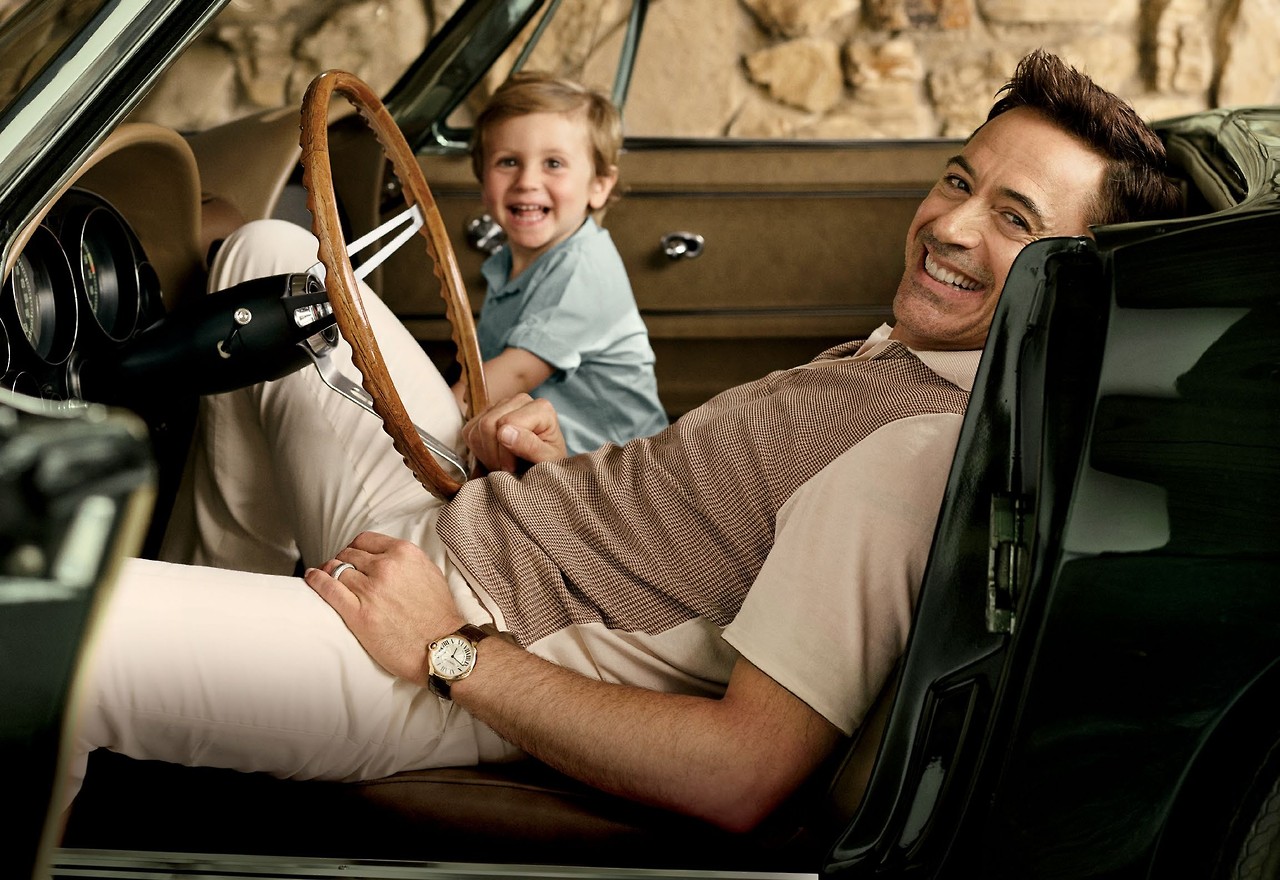 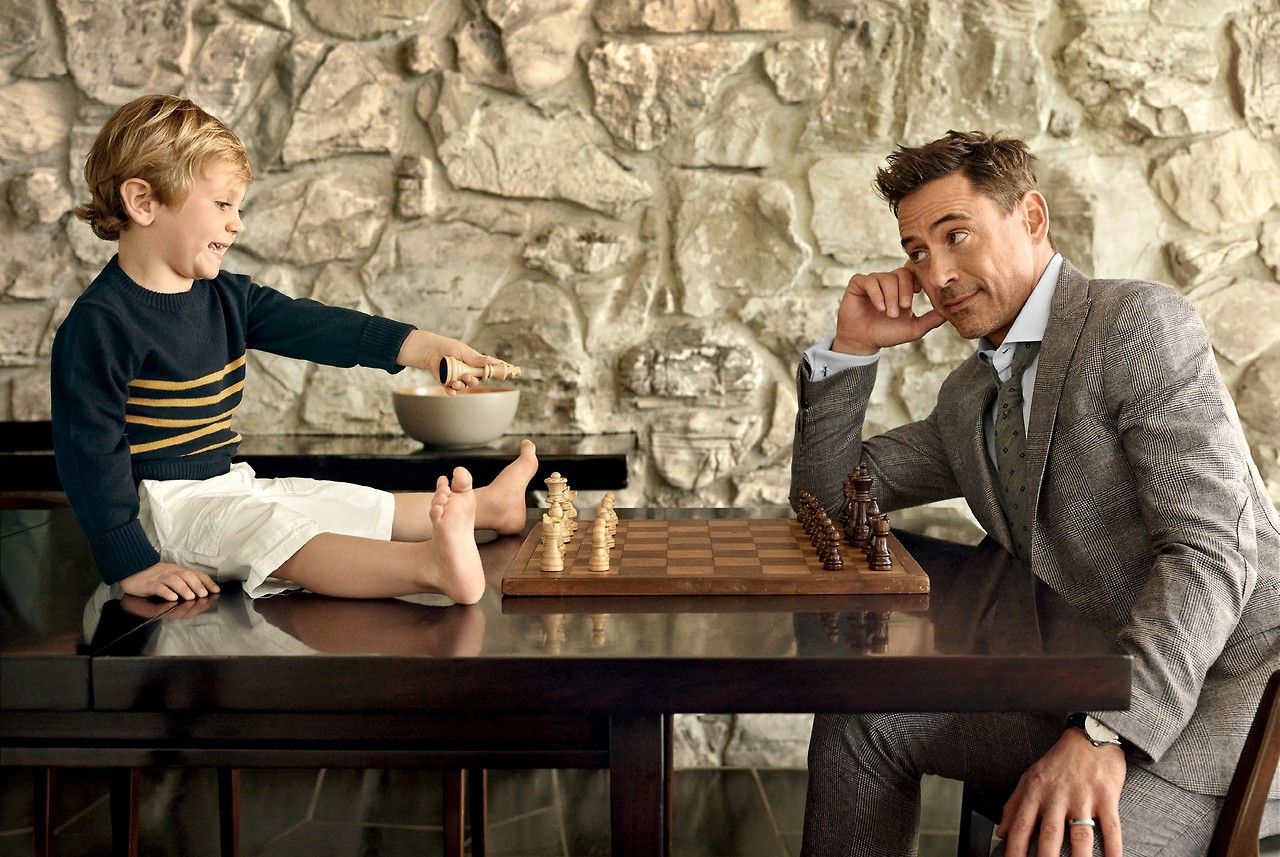 Talked w @VanityFair about #TheJudge & my sacred Marvel brotherhood. We may have a secret handshake. I'll never tell. pic.twitter.com/iMyeXNU271