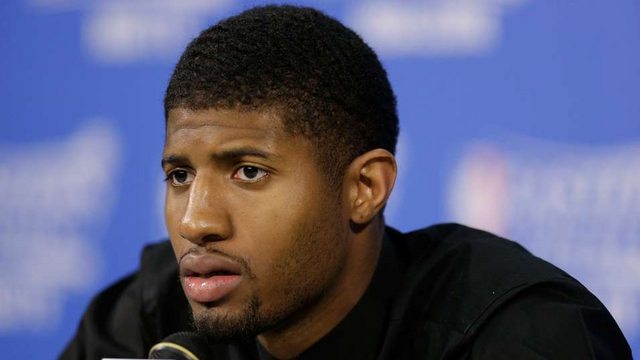 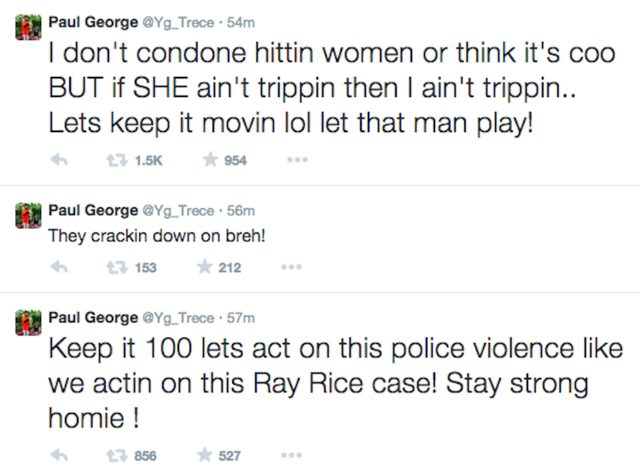 Since TMZ released new video Monday morning showing Rice knocking his then-fiancee Janay unconscious with a punch inside an Atlantic City hotel elevator, anyone and everyone associated with Rice -- except the victim, his wife Janay -- have disassociated themselves: the Ravens, sponsors, his former high school that enshrined his memorabilia, and of course the NFL, which is now dealing with its own internal investigation.


(note: George has since deleted the majority of his tweets) 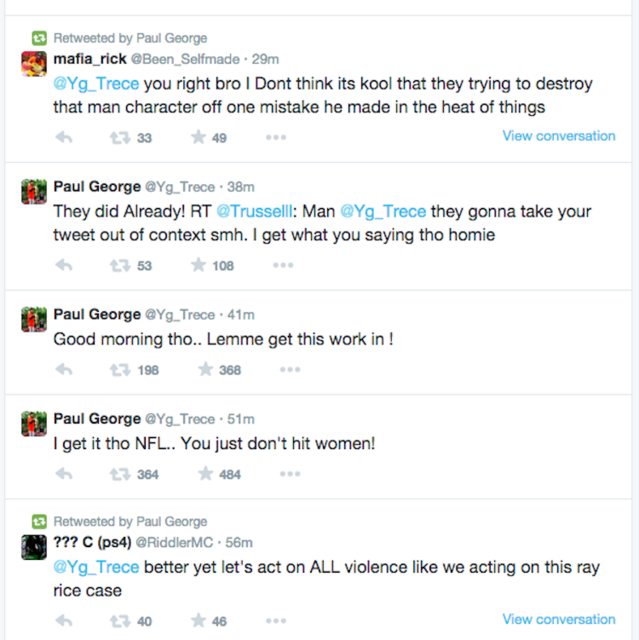 On Tuesday, in response to Rice's release from the Ravens and the ensuing media attention, Janay defended her husband in a posting on Instagram, stating in part:

"I woke up this morning feeling like I had a horrible nightmare, feeling like I'm mourning the death of my closest friend," Janay Rice wrote. "But to have to accept the fact that it's reality is a nightmare in itself. No one knows the pain that the media & unwanted options from the public has caused my family. To make us relive a moment in our lives that we regret every day is a horrible thing. To take something away from the man I love that he has worked his ass off for all his life just to gain ratings is horrific."

The Associated Press reported on Tuesday that it viewed a higher-quality video showing that Janay spit on Ray Rice prior to the brutal punch.

What Paul George's defense amounts to is victim blaming, and a failure to understand that just because she married him, does not mean that everything is OK.

After deleting most of his comments, George added this:

Let me apologize to the women and to the VICTIMS of domestic violence people my intent was not to downplay the situation..

The Indiana Pacers have issued statements on Thursday from both President of Basketball Operations Larry Bird and Paul George.

"Paul George's tweets from earlier were thoughtless and without regard to the subject of domestic violence and its seriousness in society. We have talked to Paul to strongly express our displeasure and made it clear that the NBA and the Pacers' organization will not condone or tolerate remarks of this nature. Paul understands that he was wrong and why his tweets were so inappropriate and is very apologetic."

"I want to apologize to all victims of domestic abuse for my insensitive tweets. They were obviously without proper understanding of the seriousness of the situation and I sincerely regret my poor choice of words."‎