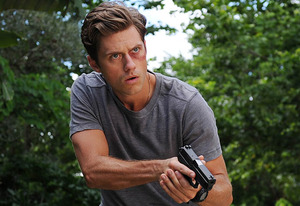 WARNING: The following story contains spoilers from Wednesday's Graceland finale. Read at your own risk.]

Did yet another beloved TV character just bite the dust? After a TV season filled with heartbreaking casualties courtesy of The Good Wife and Game of Thrones, few were likely expecting USA's sun-soaked sophomore drama Graceland to add to the body count. However, in the final moments of the Season 2 finale, FBI Agent Mike Warren (Aaron Tveit) appeared to die after dirty cop Sid (Carmine Giovinazzo) came to his hospital room and cut off his air supply, knowing full well that Mike's lungs had collapsed in surgery. Briggs (Daniel Sunjata) rushed into Mike's room right after only to find Mike without a pulse and flat-lining as the doctors rushed into try to save him. So is Mike really dead? And if so, what does that mean for the show? TVGuide.com spoke to creator and executive producer Jeff Eastin to get all our burning questions answered.

Although his heart stops in this finale, I think most fans will assume that because he is one of the two lead characters, he can't die. Is that true? Should fans still be worried about Mike?
Eastin: This wasn't a last-minute decision to try and do something exciting. This is something we've been thinking about for a long time, which is Briggs, Mike and everybody else in the house, the decisions they make ultimately have costs. Whether it's Johnny's story, which going into Season 3 is one I'm really excited about, where Carlito's putting him in a position to betray the house to save the woman he loves and puts Johnny in a really tough spot. Going into it, it was the decision Johnny made. He chose to fall in love with Lucia. He could have backed off at any time and Jakes kept warning him. ... the same with Mike. Mike at any point could have said, "Look, maybe I take the loss on this one and shut down the house." But instead he tried so hard to keep Lena alive and everything else and ended up in this spot.

As Sid is closing off Mike's air supply, he talks about killing off the rest of the Graceland team. Will Sid be back next season? Why does he seem so determined to kill not just Mike but everybody in the house?

Eastin: Those last lines to Mike really are what our intentions are for Season 3. He says to Mike, "I know all of your roommates." He knows all of them. He knows who Paige is. He knows Briggs. He knows Mike. And ultimately, he's working with Carlito, who knows Johnny and Jakes. The whole story comes wrapped up and the only person who knows he's been in that house for sure is Mike and with Mike gone, then he's free and clear to do it. Carmine Giovinazzo, who plays Sid, we got to know each other on Shasta McNasty, which is the first show I ever did on UPN. I just knew what a really good actor he was and so I had been looking for something to bring him on that was a little more long-term than just playing the villain of the week. ... The network really liked him and I think he did a really great job with the character. For us, it was a no brainer to say this is the guy going into Season 3 that we're going to pit against the house.

Paige helped Sid find Mike. Why did she give him up?
Eastin: I love the moment where Mike says, "It's good that the family believes." "Believes what?" "Believes that she's doing OK." There's that moment where Paige processes it and realizes that it's all been bullsh--. Maybe Mike's intent was never to betray her, but, like the Tin Man trying to have a heart, ultimately he sent the letter to convince this family their daughter was OK and knowing full well that he did incinerate her body. In that moment, it all comes full circle for Paige. The emotions he's dragged her through: falling in love, then feeling betrayed and that he had done these horrible things to this woman she cares about, then feeling that she had been wrong about it and then to have it all ripped back and realize she was right — for us, it really left her no choice. For her, the scales have to be balanced. To balance that scale, Mike needs to die. Obviously her dealing with that decision will figure very heavily into the next season.

Another big complication is that Charlie was able to keep the baby despite being kidnapped. How did you decide to let her keep the baby?

Eastin: The decision there was two parts. One was ultimately for her to lose the baby. Vanessa, who really is a mother, she said to us, and I agreed with her, "This is a big thing to have Charlie gone through the emotional wringer like that." What we didn't want to do was have her lose the baby and not be able to give it sort of the time it deserved. Let her go through the pain that I think Charlie needs to go through. She does lose the baby. ... Charlie's going to be dealing with that quite a bit next year so let's put it this way: She hasn't lost the baby yet.

In light of everything that happens in this finale, how do you envision changing the show next year? What do you see as the theme if the show comes back next season?
Eastin: We started looking at what worked and what didn't. One thing that we realized was Briggs' character had taken a bit of a backseat early on in the season and we want to bring Briggs really back to the forefront. ... A lot of things are also based around the idea of these friendships. The idea is that Graceland is a sanctuary. Behind these walls, they can relax and drop their guard and we've done our best in the first two seasons to fracture that. So a lot of what Season 3 will become is really trying to restore order out of the chaos that we've created and, of course, that will not run smooth at all.

What did you think of the Graceland season finale? Did you think Mike is really gone? Will you miss him?

read the rest at source