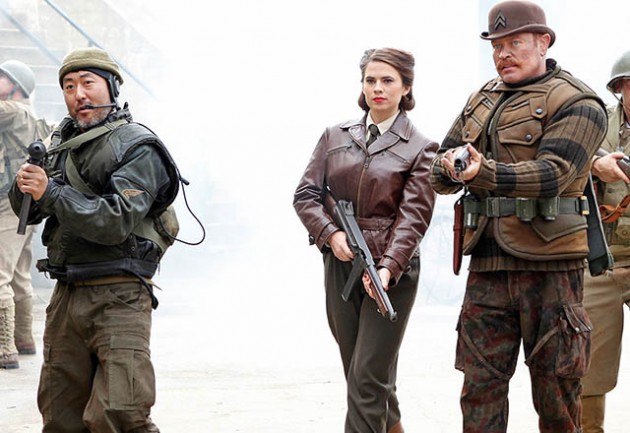 She fought the good fight in the Marvel comics and the Captain America films, now Agent Peggy Carter fights it again on Marvel's Agents of S.H.I.E.L.D. The badass heroine, played by Hayley Atwell, will be seen in a 1940s-era flashback kicking off the Sept. 23 season premiere of the ABC series — and TV Guide Magazine has the first look!

Back in the day, Carter was an integral member of the S.H.I.E.L.D. prototype group Strategic Scientific Reserve and her path was similar to that of Director Phil Coulson (Clark Gregg), who must now rebuild S.H.I.E.L.D. from the ground up after the seismic events of last season.

"Coulson is a big student of history and wants to return to those old ideals of Agent Carter's time," says executive producer Jed Whedon. "He's, like, 'Let's be the S.H.I.E.L.D. we were meant to be!' He wants to do the job right this time."

Atwell, who will star in the 2015 spinoff series Marvel's Agent Carter, is joined in the flashback by Kenneth Choi and Neal McDonough, playing their Captain America characters Jim Morita and Dum Dum Dugan, respectively. No word yet if either actor has signed for the Agent Carter series.

And now for the wig fitting pic.twitter.com/d2YjK65pQN