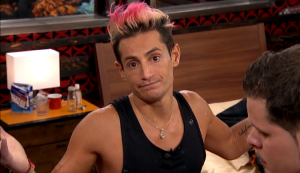 Last month, against our better judgment, we told you about Ariana Grande's brother, Big Brother season 16 contestant Frankie Grande, and his dramatic-in-his-own-head reveal of his own microcelebrity. Since then, Frankie has revealed himself to be a little bit self-obsessed and a lot bit deluded.

In other words: he's revealed himself to be a YouTuber with a famous sister.

The pitchforks have been out for Frankie among those who watch Big Brother's infamous 24/7 live feeds, who have seen a fuller picture of the guy than has been shown on TV. However, in the past few live episodes, Frankie's revealed more of what viewers – like the one who put the above video together – have seen for weeks. Things on the live feeds have been even worse.

Though Frankie isn't to our taste, we don't know him, and we can't judge him as a person based on his behavior on a reality TV competition. We can, however, chart exactly how he fell from grace as a member of viewers' chosen Team America into glaring into a camera and saying he doesn't care about them.

The Destruction of 'Zankie'

The primary reason why viewers are furious with Frankie is because he instigated the removal of his fellow housemate Zach. While still in the house together, Zach and Frankie had an intense bromance that involved Zach insisting (and often) that they'd be together if he was gay. It snowballed and became an Internet fascination.

Unfortunately for Zankie fans, Frankie chose to backdoor Zach – put him up for elimination as a replacement for a nominee with veto power – thus getting him evicted and breaking up the bromance. This didn't go over well with viewers, nor did it please his sister Ariana.

The issue here is that Frankie backdooring Zach was actually a strong — or at least defensible — gameplay move. On the whole, Frankie's been playing a good game: unemotional, social, quick-witted. While fans may not like seeing their favorite non-couple split up, there's nothing wrong here from a Big Brother perspective.

But there are plenty of other, valid reasons not to like Frankie.

On a couple of different occasions, Frankie has said things that one might generously describe as "monstrous."

Most recently, he made rape jokes at the expense of a female contestant, Victoria, behind her back. Her family got wind of this and have asked both Frankie and Ariana to apologize.
Now, even if you were being unnecessarily generous, you could chalk all this up to just word vomit on Frankie's part. He's tired, in a weird environment, spouting nonsense. That still doesn't make any of it okay.

Last week, as part of Team America, Frankie and his teammates had to come up with their own mission and execute it. Viewers would then decide whether they passed or failed. Team America member Donny – who is beloved by viewers – was on the block for elimination last week, and thought saving himself would make for a good mission. Frankie instead decided to put on a play – in which he dressed up as eliminated female contestant Joey.

After they failed the mission, Frankie blamed the whole thing on America not being comfortable with a man in drag, which is a bafflingly bad defense. He got angry with viewers, directly addressing the camera and saying he didn't care about them. His fellow Team America member, Derrick, even distanced himself from Frankie in a confessional. Additionally, Frankie started talking in his own confessionals about what "dead weight" Donny was and how it was the right call not to save him.

Of course Frankie should have realized saving the America-beloved Donny would have been far better mission than putting on a play. Sure, he opted against it because Donny was a threat to win the entire game, and that makes sense. But why on earth did he think people wanted to see him in a play? It all comes down to delusion.

There's just too much evidence at this point that Frankie is self-deluded to ignore. You can watch the video up top for a ton of them, but here are some highlights:

That last one is particularly hilarious. Who does Frankie Grande think his family is, the Rockefellers? The Boca Raton Missileboob Grandes aren't exactly this grand dynasty that must be protected – and even that isn't his concern. At no point has he said "I'm the brother of an up-and-coming pop star, and if I act a fool on this show, her brand could be damaged." If he did, that would almost be respectable. No, the Boca Raton Missileboob Grande name wouldn't be any more precious, but it'd be a nice gesture.

Instead, he seems solely dedicated to keeping up his own image. Remember that he is a self-declared "social media mogul" and "TV star." He's on a TV show – watched by millions of viewers – where he's told rape jokes about one of his housemates, stated that he thinks being a lesbian is a choice, and gotten mad directly and aggressively with viewers.

With all he's done to anger the Big Brother audience, Frankie should realize that his name's ship has sailed.