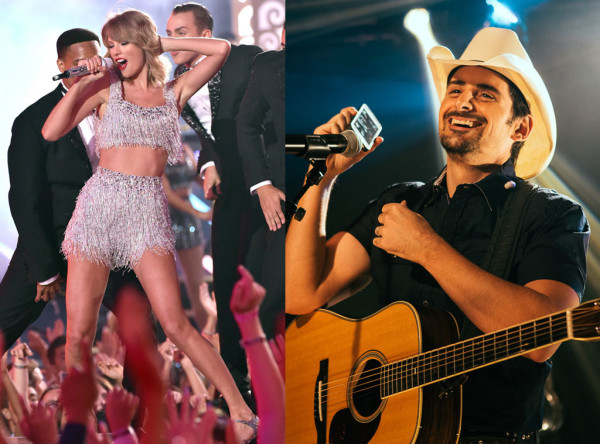 When Taylor Swift released her "Shake It Off" single and music video earlier this month, it was it official: The former country singer has made the switch to full-blown pop star!
So what do her Nashville contemporaries think about this crossover?

Brad Paisley finds it "admirable," he told E! News Thursday at iHeartRadio's release party for his ninth studio album, Moonshine in the Trunk.
Taylor "has this vision for who she wants to be going forward," said the "River Bank" singer. He also praised his longtime pal for "say(ing) in a risky way, 'I am going to evolve beyond what you know me for already.'"

"People are going to have to get used to it cause its not the Taylor Swift obviously that you knew," he said. "Because this is somebody—like, she was talking about how she cut her hair, and she is spending time in different cities more and becoming more of a product—and she is a world famous superstar now. She is just not Nashville's, [and] we just have to kind of get used to that."

Brad, 41, isn't worried about Taylor, 24, and her future in pop music. "People are going to love it," he said, referring to her musical transition. "It's going to sell, and it already is [selling]. She has done a great job."

As far as Taylor calling out her haters (literally!) in her current single? "All of us have the urge to do that, and I respect her for doing that," said Brad. "I have that urge to do that as well, because it gets old just taking it when you're in the public eye."

"It gets old to sort of take it, and it's very noble to not say anything, but it's hard," he said. "It becomes a lot of fun to really steam now and again and challenge somebody who hates you. Because in the end, it's all very sort of unreal and not always accurate."

Yes, the NASCAR news from Atlanta is bound to be a little bit heavier than normal this weekend with Tony Stewart‘s return to the track and his impending media availability later this afternoon.

However, that doesn’t mean there isn’t room for a bit of levity, and Denny Hamlin has provided it.