Kristen Stewart on What Causes 'Bad Acting,' and Why She Took a Two Year Break! 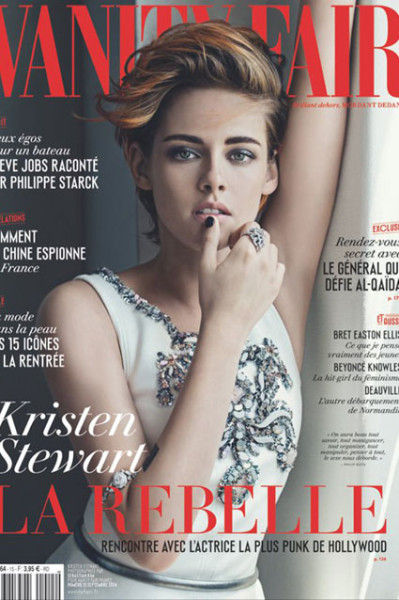 An orange-haired Kristen Stewart covers Vanity Fair France, and in the new interview, the 24-year-old Twilight star gets candid about her acting philosophies. According to Kristen, her performance all hedges on if she's "vibing" with her co-star or not.

"I'm not the type of actor who can perform without wearing a mirror on my face. Everyone knows that you're better with other actors who are really present, who you are having the same experience with, but I am made or broken on it," she explains. "If I'm working with someone who I'm not vibing with, or who I have to fake anything with, then it's sad for me and it's bad acting."

And though she of course doesn't name names, she does reveal that she's definitely been in this type of "uncomfortable" situation before.
"I haven't been totally screwed, but I've had to force things. I've had to be in front of people and be like, 'Oh, thank God we only have a few scenes together,'" she says. "I never know until a few days, or a few scenes, in. At first you think maybe we just haven't fallen into our rhythm. But as soon as you are exhausted by trying to find it, you give up and just sort of fall into default mode -- it's just sh*tty. It's just not fun. And it's not as good. When I look at those scenes I go, ‘ugh.’ I don't like watching them." MORE after the cut Stewart also addresses the two-year break she took after the blockbuster success of The Twilight Saga and Snow White and the Huntsman.

"Seriously, I think that after Twilight and after Snow White and the Huntsman, which were such huge movies, that I felt I didn't want to search for the next 'big, successful' thing," she explains. "One thing that people do with two enormous movies is think that that's their thing now, to do big movies, and ride that wave. I got off this huge wave and said, 'I'm going to go in for a bit.' I'm going to come back out later. That was good. I needed some time off ... I needed to like, live in my house and be surrounded by my own sh*t and play guitar and write."

The notoriously press-shy actress surprisingly admits to some vulnerabilities growing up in the lengthy new interview, though now she says she could care less about how she's publicly perceived.

"I was kind of a cocky kid, and so when you go to school and you're not fully accepted as this girl who was supposed to look like a girl, it affected me. I would get called a man—and all this stuff. There was a very, very brief time when it bothered me. Then it ended because when I started working," she explains. "I never tried to shape people's perspectives of me, which is something that a lot of people do. There are certain actors and artists who want to be a certain kind of actor or certain kind of artist, and I'm really not like that."

"I try not to let it mess with me, because my true personal life, as much as people think they know about it, they don't know d*ck sh*t. Who could?" she adds. "By the way nobody knows. Nobody knows what the f*ck is going on. You're going to die. You're going to lay next to the people that you know the most in life, the people that you're going to grow old with. But you're going to lay next to them in the middle of the night deeply curious about them and who they are, because nobody f*cking knows anything."
http://www.etonline.com/movies/150456_kristen_stewart_talks_bad_acting_and_taking_a_break_vanity_fair_france/index.html
Tagged: kristen stewart

bossm
August 27th, 2014, 09:15 pm
The worst was her acting in BD2. She was constantly pissed and she overacted so much. It was so ridiculous.