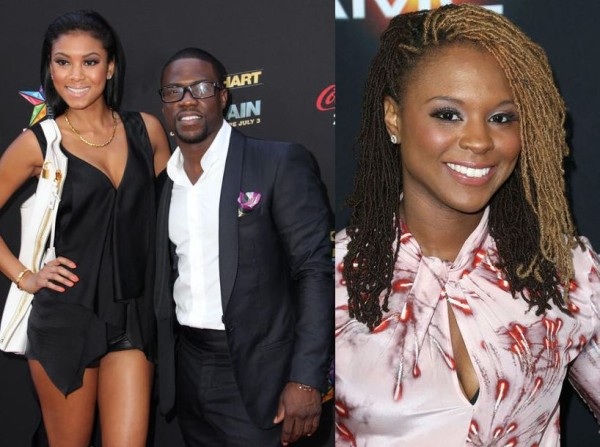 And the conversation about team light skinned and team dark skinned continues.
Kevin Hart‘s ex-wife Torrie Hart who filed for divorce from the movie star when he cheated years back, is speaking out yet again.
In May, Torrei made headlines after bashing Kevin’s model girlfriend Eniko Parrish.
In an interview with Cherise Nicole, the VH1 Atlanta Exes star talked about getting over Kevin and why black date outside their race when they become successful.
On black men dating outside their race when they become successful: “Honestly, it wasn’t all Kevin’s fault. I won’t say it was all his fault. Cause I look back now and I take ownership of some of the things I could’ve did differently. But, I did question my beauty. I did question like, wow, why is it that all black men, when they reach a certain level, they have to feel like they need someone of another race, or a different skin tone on their arm? And I’m just like, well why aren’t we looked at as beautiful? We’re beautiful black queens! You know what I mean? And I love my black men.
You know and I support them 100% And I don’t feel like, once I make it, I gotta go to the other side! You know? And not saying, cause I’ve dated outside my race, I have, but I just don’t feel, like I need it on my arm to feel better about myself. And I just feel like, sometimes our men do.”
On not being a bitter ex: “You know they say, she done went crazy! Or BITTER! And it’s like no, did you forget what you did? You know, but honestly it’s about how we react to what they do. And you know, it’s about changing your reaction. And I was hurt. I was deeply hurt, I knew this man, way before any of the celebrity and any of the fame. And we had children and I thought marriage was forever, but it’s not.”
I just have to accept this situation for what it is and move forward now. That’s when I felt like a load is off. You know I just felt free. I was like, you know I did a little bonfire in my back yard, I put his name on a list, with everybody else, who during that time, you know, who I thought had my back, but didn’t. You know, I was like, I forgive this person. I forgive this person. And I just did a list. And I went out to my backyard and I prayed on it. And I lit on fire and I buried it and gave it to God. And when I tell you honey, like chills. I really felt like freedom. I really felt free. So, that was just something I did. You learn what tools you need to get passed certain experiences that bring you down.”