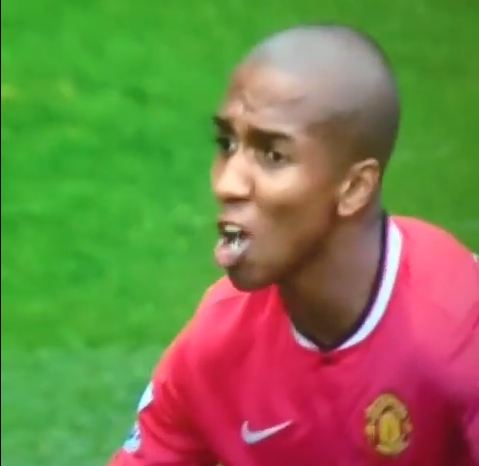 Vine here (IDK how to make it imbed)

Louis van Gaal’s side walked out at Old Trafford for their first Premier League match under Louis van Gaal with renewed optimism, but it was soon normal service resumed as Swansea took the lead through Ki Sung-Yeung’s first half strike.

It couldn’t get much worse for United, but that’s exactly what did happen for midfielder Ashley Young. The England international was left fuming at his side’s defending and gave them a piece of his mind, only for what appeared to be a chunk of bird excrement to land in his mouth.

It also showed that football fans are ready to try and defy the Premier League following their announcement that they will attempt to crackdown on Vines of live action.

United also has Jesse Lingard limp out of his Premier League debut with a knee injury, and he was replaced early on by Adnan Januzaj to cap a dismal opening half to the season.

The bonus was at least Young didn't dive after the contact.

Nobody really seems to know an awful lot about Liverpool’s new signing Alberto Moreno, but for some reason we can’t put our finger on, he looks very familiar.

Not a bit familiar; like really, really familiar. Suspiciously familiar. Now Twitter has come up with the reason why, and we’re convinced the theory is correct. It must be.

The 22-year-old is apparently the secret love child of current Liverpool captain Steven Gerrard and their former midfielder Xabi Alonso. Yep, that’s it.

Is this the reason Liverpool have spent £12million on buying him? Almost certainly.

Gerrard and Alonso were caught kissing after winning the Champions League trophy in 2005, and while the dates don’t add up, we’re convinced Moreno is related to both of them.

And you’ll never be able to look him again.