Dominic A. Martin) wrote in

VIDEO PREMIERE: ‘CLASSIC’ BY THE KNOCKS 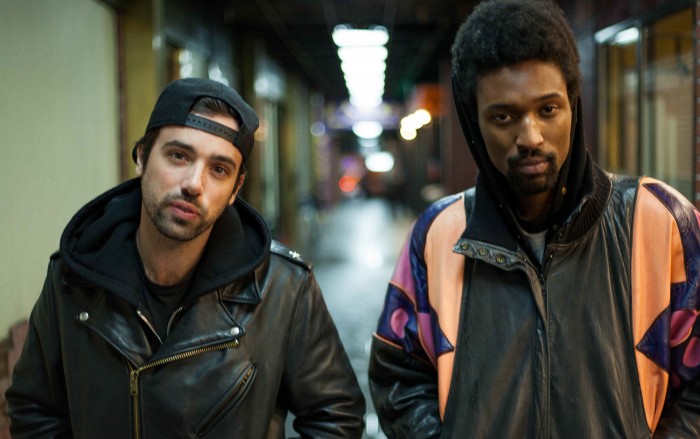 The iconic disco movement of yesteryear, which your parents partied to in the late ’70s and early ’80s, didn’t see much of a rebirth until the late ’90s. As you probably remember, it began to slowly resurface in playful elements of French house acts. Despite it being a genre which we can comfortably credit for much of what we hear today, it undoubtedly shied away from fully adopting disco as a modern genre by also borrowing elements of ’70s funk and classic house. That is of course only true if you disregard mainstream artists like the Spice Girls, who also toyed with the idea. But renewed interest in disco as a cool and modern genre wasn’t full blown until the early 2000s. It was artists like Daft Punk and Justice consciously paved the way, dropping hints for newer artists to embrace. It was only a matter of time before the underground electronic dance movement would fully embrace its resurgence.

Fast forward to 2014, and you’ve got bands like the The Knocks, out of New York City, delivering fresh cuts for cool kids. You’ve probably dealt with their dance floor scorchers unknowingly–they’ve done killer remixes for Two Door Cinema Club, Foster the People, Santigold and Haim. But why we’re here today is to premiere the outstanding visual that accompanies their new and delectable single “Classic.” The leading single is taken from their forthcoming debut album which officially drops October 7th via Big Beat Records. We asked the guys a few questions on what the journey has been like so far- which you can check out below.


FYI thats just a visual for the audio.. the official video is coming.

You’ve been making music since 2007, how do your musical inspirations differ now, from then?
We get inspiration from everything, really. It’s hard to pin-point where and how it comes. One thing that does differ is that now we are on tour a LOT, so we definitely get inspired from playing shows and seeing people react to songs, as well as watching other bands on tour with us or at festivals. It’s just good to be around music and other creative people at all times.

What sparked the collaboration with Fred Falke in 2012? Do you guys have a favorite remix of his? Mine is his “Golden Cage” remix.
We LOVE that remix. We also really like his remix of Heavy Cross by The Gossip. He has some super classic remixes out there. We actually just reached out to him because we met him at a show. He was in NYC for a couple days and came by and we started that. It was a huge deal to us, as we really look up to Fred and all those French house guys. We were super happy with the result.

The music video for “Geronimo” is spot on. How do you go about finding the right vision for your videos?
Thanks! We are super hands-on when it comes to picking directors and treatments. The guy that directed “Geronimo” was actually an old manager of ours. We really trusted his eye and vision and loved the documentary style treatment he had, so we ran with it.

How did you choose to collaborate with Powers for the new single?
We actually have known them for years and never had a chance to properly work on something together… We were in LA with a day off and stopped by their studio to mess around. We ended up starting this idea which we took home, and over time it turned into “Classic.”

Who directed the music video for “Classic” and what was the inspiration behind the visuals?
We don’t have an official music video yet.. We shoot that soon. That teaser was just made to promote Full Moon Festival.

What did you envision when writing “Classic”? Is there a specific feeling meant to be evoked by listeners?
We just wanted to hit that nostalgia nerve. Some of our favorite songs are ones that, instead of making you want to go have a great time at that moment, make you want to think and reflect on all the good times you’ve had at a certain point in your life.

What is your ideal tour?
We actually just confirmed a pretty ideal tour. Can’t announce it yet, but we will be announcing next week.

If you could bring back a disco legend to tour with who would it be and why?
Donna Summer!

Do you guys share any love for The Twelves?
Yeah a lot of love. Back in the Blog Haus days, they were all we used to spin. They definitely had an influence on our early remix stuff.

When can we expect a full length album?
In the fall!

What are some of your favorite NYC hangs?
We usually go to spots that we have been going to forever, where we know the owners and stuff. Places like Blind Barber, Tutus, Le Baron, etc. Any place where it can turn into a sweaty dance party.

Everyone has their own definition of the word "classic" and their own opinions on what a "classic" song is. This is a collection of songs from a range of different time periods and genres that we consider classic in our eyes. Some original versions, some edits or remixes but still classic song writing in our opinion. We hope you enjoy our walk down memory lane
[Tracklist]
Jackson 5 - I Want You Back (Z-Trip Remix)
The Beegees - Stayin' Alive (The Teddybears Remix)
Stevie Wonder - Signed Sealed Delivered
Simon & Garfunkle - Cecelia
White Town - Your Woman
Talking Heads - Burning Down The House
EMF - Unbelievable
Fatboy Slim - Praise You
Justin Timberlake - Senorita
Chic - I Want Your Love (Todd Terje Edit)
Shannon - Let The Music Play
Khia - My Neck My Back
Madonna - Get Into The Groove
New Order - Bizarre Love Triangle
KC & The Sunshine Band - Thats The Way I Like It
Daft Punk - Da Funk
Ohio Players - Rollercoaster
Slave - Just A Touch
Talking Heads - Once in A Lifetime
Soul II Soul - Back To Life
Morissey - The Last of The International Playboys
The Petshop Boys - West End Girls
Paul Simon - Call Me Al (Flight Facilities Edit)
Salt N Peppa - Push It
Bruce Springsteen - I'm On Fire (Cousin Cole Edit)
The Clash - Rock The Casbah (B-Roc/Funkagenda Refix)
Junior Senior - Move Your Feet
Fleetwood Mac - Dreams (Gigamesh Remix)
The Smiths - This Charming Man (Luis Leon Bootleg)
The Knocks Ft. Powers - Classic