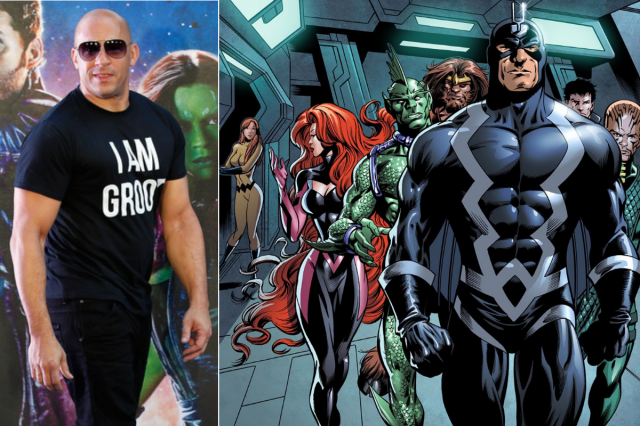 Guardians of the Galaxy
was Marvel’s big gamble on whether or not they could sell a group of unknown characters in a unique world based on the studio’s brand alone.  They won that bet, and now it’s given Marvel the confidence to move forward on another team of mostly unknown, strange characters: The Inhumans.  As we reported back in March 2011, the studio was considering adapting the comic into a movie.  In July 2012, Marvel Studios President Kevin Feige told Entertainment Weekly that if either Guardians or The Inhumans became a movie, audiences could expect an “X-Men-style ensemble, a la The Avengers.”  In a broad sense, that’s true: A team of misfits and outsiders comes together to battle a larger foe; beyond that, I doubt many would compare Guardians to X-Men or The Avengers.  But for over two years, there was no word on The Inhumans.

The other day, Vin Diesel dropped a hint about being part of The Inhumans, and it turns out he wasn’t just blowing smoke.  The studio is happy with the existing script by Joe Robert Cole, and now the next logical step is to take it out to filmmakers.  Hit the jump for more.

( Marvel plans to handle The Inhumans in the same way they handled Guardians of the Galaxy.Collapse )

so vin diesel is really black bolt then