Iggy Azalea's "Black Widow" Was a Gift from Katy Perry 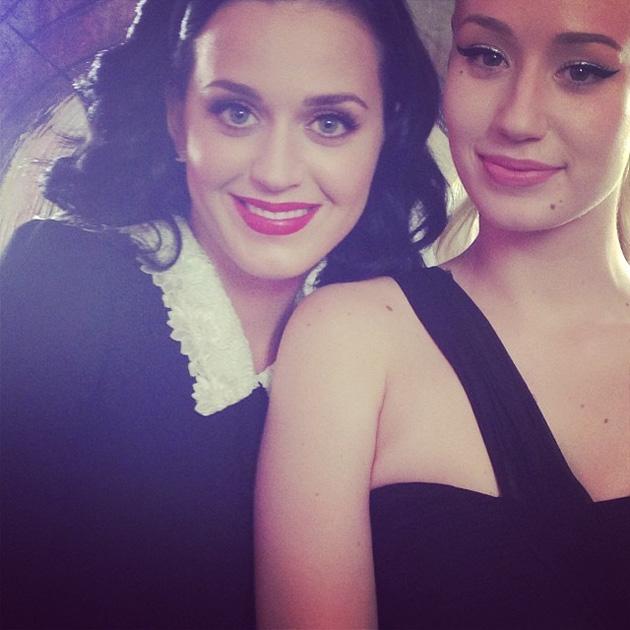 Now that Iggy Azalea 's shown everyone her "Fancy" side, she's showing a darker side with her latest single, "Black Widow."  If the song sounds a little bit like Katy Perry 's hit "Dark Horse," it's no surprise, since Katy co-wrote both songs.

Iggy explains that she became friendly with Katy the same way she got close to Ariana Grande , her "Problem" duet partner: she kept running into her at industry events, and that's what led to their musical collaboration.

"They are kinda just two girls that I always end up seeing at MTV Movie Awards, and I see them around a lot and I love them both," Iggy says of Katy and Ariana.  "They're really funny, quirky girls -- Ariana a lot more than people would realize!"  Iggy laughs, "She's actually a little feisty!"

But how did Iggy go from hanging out with Katy and Ariana at award shows to recording "Black Widow"?

"Katy Perry said to me, 'Hey I've got this song, I've been writing and I think you should do it. I just keep picturing you on it,'" Iggy explains to ABC News Radio. "That's how my collaboration with her kind of began: first we had a friendship and then she wrote something that she had me in mind for. And, being that her album was already out, I said, 'Will you let me have this for my album?'" Iggy laughs, "And she did me the kindness!"

Collaborating with Ariana, though, turned out to be a bit more difficult -- at first, she says, the two couldn't connect.

"I wanted to do something with her on her first album but it didn't end up being able to happen," Iggy tells ABC News Radio. "And I ended up meeting Max Martin , who I'd wanted been wanting to work with for a while too, and we did 'Problem' together and she came into the studio."

"It was really cool," adds the Australian rapper. "Usually I have to email back and forth with people and I don't get to actually work in person with them, but Ariana on this record was something where I did get to sit in the studio with her for two days and create."