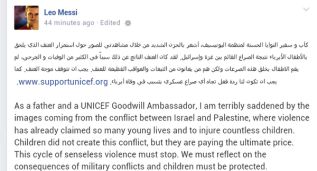 Barcelona soccer sensation and UNICEF goodwill ambassador Lionel Messi posted a picture of a wounded Palestinian child from the Gaza Strip on his Facebook page Thursday, with an accompanying caption appealing to end all violence affecting children in the region.
“I am terribly saddened by the images coming from the conflict between Israel and Palestine, where violence has already claimed so many young lives and to injure countless children,” Messi, who has nearly 68,000,000 Facebook followers, wrote both in English and in Arabic.
“Children did not create this conflict, but they are paying the ultimate price. This cycle of senseless violence must stop. We must reflect on the consequences of military conflicts and children must be protected,” he concluded.
The post was quickly “liked” over 25,000 times, with many comments praising Messi for taking a stance on the conflict, and others urging him to remove the post.
Last year, Messi and the Barcelona squad took a break from their preseason training and flew to the Holy Land for a two-day “peace tour” with Israeli and Palestinian kids. The visit was originally to have included an exhibition match between Barcelona and a joint Israeli-Palestinian Authority team of professional players, but the game was canceled after the Palestinians objected to playing alongside Israelis.
Gerard Pique lands in trouble after letting off a stink bomb on Barcelona's flight to Finland 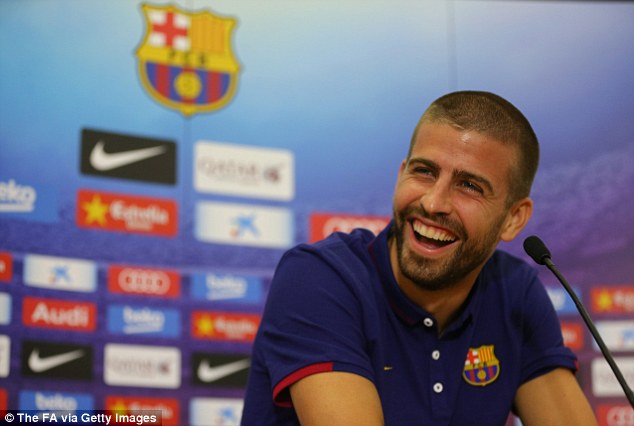 Barcelona prankster-in-chief Gerard Pique has annoyed airplane staff by letting off a stink bomb on the club's flight to Finland, according to reports in Spanish newspaper Sport
According to flight attendants, the Spain international dropped the stink bomb towards the rear of the plane - forcing furious staff to apologise to travellers.
The flight landed in Helsinki as scheduled where Barcelona will play a friendly against local side HJK on Saturday.
Pique is renowned for his practical jokes in the dressing room. In 2010 he was turned in by Carles Puyol for pelting the team bus with sunflower seeds and in 2012 he announced the premature arrival of his baby son with pop songstress Shakira before admitting it was a joke.
The 27-year-old is also reported to have teamed up with Lionel Messi to burn a moped belonging to one of the club's staff because it was too noisy - although the pair did replace it with a brand new model the next day.
Luis Suarez hears first day of appeal against four-month ban for biting at Court of Arbitration for Sport in Lausanne 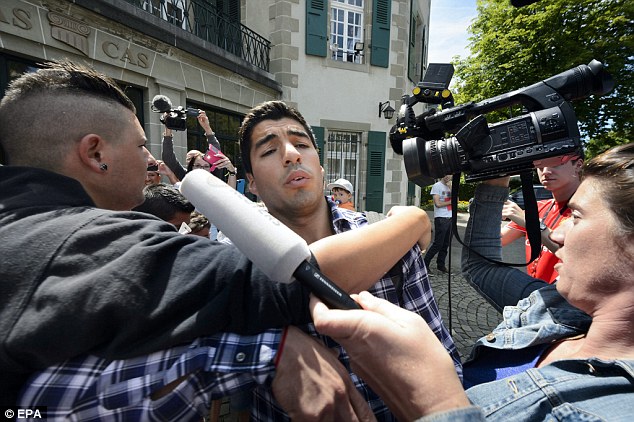 Luis Suarez has left the Court of Arbitration for Sport (CAS) in Lausanne following a five-hour hearing on the first day of his appeal case against his four-month ban for biting Giorgio Chiellini at the World Cup.
Suarez refused to answer questions as he left the CAS headquarters in the Swiss city but did stop to sign autographs for waiting fans.
The Barcelona striker and his legal team are confident the ban from 'all football-related activity', handed down by world governing body FIFA, will be halved.
This would open the way for Uruguay star Suarez, 27, to return after August 25, potentially making his debut for the La Liga club at Villarreal on August 31.
His legal team will argue that the ban should be restricted to international football and that he should be allowed to train with Barcelona while he is suspended.
Following the hearing, CAS issued a statement which read: 'The Court of Arbitration for Sport (CAS) has today heard the appeal of Luis Suarez, FC Barcelona and the Uruguayan FA against FIFA. The hearing took place at the CAS headquarters in Lausanne, Switzerland.
'The player was present and gave a statement to the Panel of CAS arbitrators: Mr Bernhard Welten, Switzerland (President), Professor Luigi Fumagalli, Italy, and Dr Marco Balmelli, Switzerland.
'At the end of the hearing, the panel informed the parties that it will issue its decision as soon as possible, probably before the end of next week.
'The full arbitral award, with the grounds, will follow at a later date and be published by the CAS.'
FIFA imposed the four-month ban from all football, plus a nine-month international ban and a £66,000 fine, after the former Liverpool player bit Chiellini on the shoulder during Uruguay's 1-0 win on June 24.
The governing body's appeal committee have already turned down an appeal against the suspension.
But FIFPro, the world players' union, supports a reduction in Suarez's punishment at domestic and international level.
A statement on the organisation's website read: 'That Luis Suarez has been trialled and vilified in public, ever since the incident, is a sanction in itself.
'On the other hand, it has been remarkable to see the response from his fellow professionals and the victim himself, Giorgio Chiellini.
'Many agree the sanctions are excessive. This is an important signal for the CAS panel to consider.
'The sanctions are a disproportionate response to the offence. 'Especially the four-month ban from all football-related activity, which is unfair for Suarez as it infringes his right to work at club level.
'In the international arena, where the offence was committed, a nine-match ban for Uruguay is also too strong as it effectively equates to a two-year sanction.

'FIFPro states the educative nature of the sanction mentioned by FIFA in the ruling can be much better achieved by making it partially conditional, including the obligation for Luis Suarez to receive treatment.
'This can be applied on the number of matches but also on the period of the ban. The FIFA appeals committee missed an opportunity to take this into account. FIFPro expects that CAS will respect these assumptions.'
Suarez's lawyer Alejandro Balbi, a member of the Uruguayan FA's executive, admitted there was little chance of overturning the nine-match international ban, but there was a likelihood of getting the four-month overall ban reduced.
Balbi told Uruguyan newspaper El Observador: 'It would be more logical to reduce the sanction by a few months than to reduce the ban concerning international games, because legally it's easier to contend against the terms of the suspension that forbid him from training and from being at the club, because they violate fundamental rights.
'The other ban (the nine-match ban for Uruguay) is more a question of the level of the punishment.'
Liverpool sold Suarez, who scored 31 goals last season, to Barcelona for £75m after his FIFA ban.