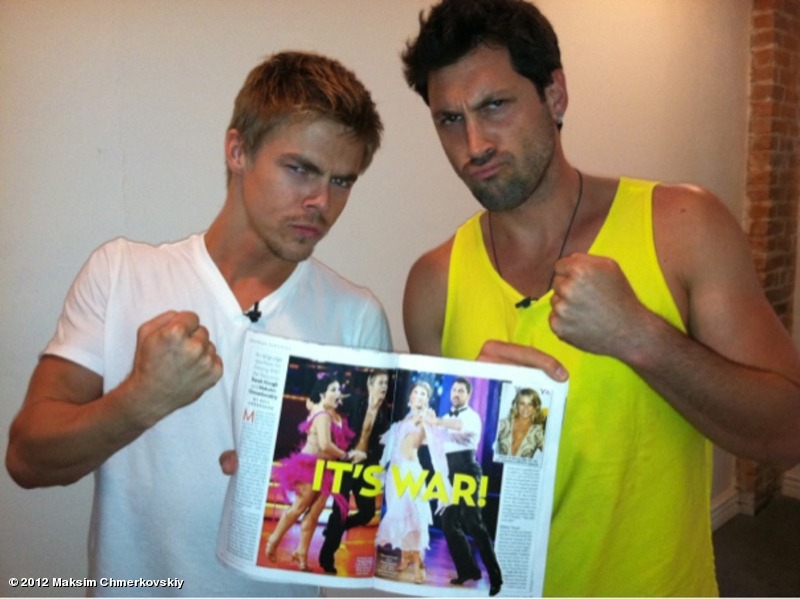 Derek Hough’s book, Taking the Lead: Lessons from a Life in Motion, is coming out tomorrow (August 5), but while he was still on tour with his sister Julianne Hough, he previewed some of the book’s leading lessons with USA Today.

One lesson references Derek’s fellow
DWTS pro Maksim Chmerkovskiy, who has affectionately and not-so-affectionately been dubbed The Bad Boy of the Ballroom. That lesson was labeled “Power over others is weakness in disguise,” and it’s likely to raise some eyebrows — and do nothing to heal rifts in the respective Maks and Derek fandoms.

Fellow Dancing With the Stars pro Maksim Chmerkovskiy, known as the bad boy of the ballroom, is really insecure. Hough says Maks and his Olympic skater partner Meryl Davis were never dating, despite their closeness on the show. "No," he says, explaining that
the show created a story line for them: Meryl became the coach, Maks became the student. "I've always known this," says Hough, "but (Maks) is incredibly insecure. He's not confident in what he does as much as he puts it out. So he overcompensates. If you think about it, that's why people lash out, get angry or frustrated - is out of fear. If you're very confident in who you are, you wouldn't have reason to lash out."


Maks probably wouldn’t disagree with the idea that he has insecurities, but is it different when a fellow pro publicly calls you out on it? (This is now the second Hough family member to call out Maks, after guest judge Julianne accused Maks of phoning in his Switch Up dance.)

Back in Season 18, Week 6, Maks exposed his fears during Tango rehearsals with Meryl, reliving the drama of Julianne accusing him of phoning it in. Meryl said the problem was that he was questioning himself. Maks said he wasn’t scared, he was terrified. In the back of his mind he could see this as the season where he could finally win. He didn’t want to get sucked into the competition, since he saw that as his mistake in past seasons, but he was right back in that mindset. “I must be the weakest friggin person in this cast,” he confessed. Their Tango ended up being one of their best dances, and of course they went on to win the season.