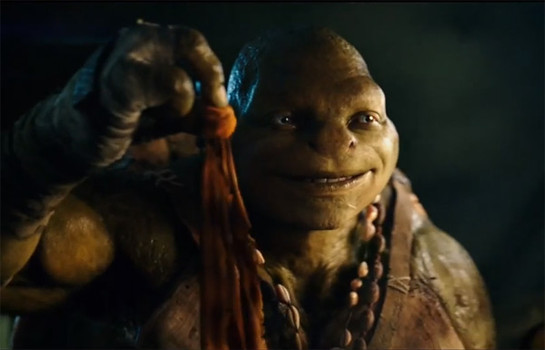 If You Get Drunk and Mock One Movie With Your Asshole Friends This Year, Make It 'Teenage Mutant Ninja Turtles'
Let me preface this review by saying I was not expecting Teenage Mutant Ninja Turtles to be good. It wasn’t like The Amazing Spider-Man, where there are great casting choices at play and you know it could be worth your time and money, only it wasn’t. I was angry watching The Amazing Spider-Man. I was not angry at Teenage Mutant Ninja Turtles. Instead, I was staring at the screen in complete and utter shock. It’s almost impressive how bad this movie manages to be.
What’s wrong with it? Where to start? What it all boils down to is this—Teenage Mutant Ninja Turtles has no idea what it is or who it’s for. The original premise of the turtles mythos, the one you’re probably familiar with from the cartoon or the ’90s movies, is fairly simple: Turtles get oozed. Turtles are raised and taught martial arts by a rat named Splinter, whose own master was killed by Shredder. Shit happens. I don’t need anything more complicated than that—it’s a movie about ninja turtles, for Chrissakes. I don’t need story complexity. I need charming, goofy fun.
( It's weirdly sexualized in a way I’d hoped a TMNT movie would never beCollapse )