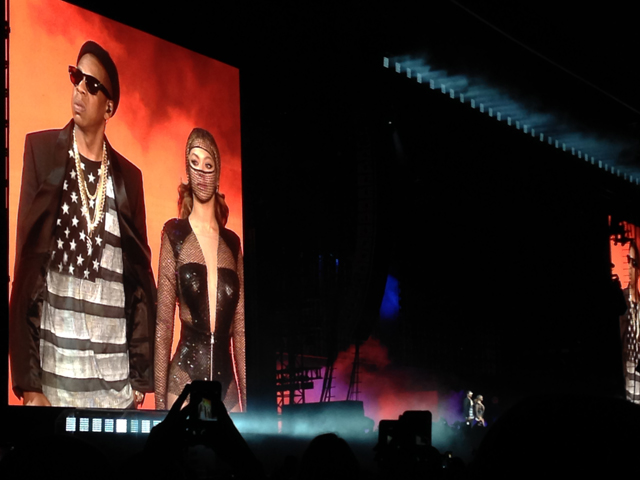 Are Beyoncé and JAY Z breaking up? Or just trying to get into your wallet?

We're used to constantly talking about Beyonce. From surprise releases and feminist schooling to elevator brawls and divorce rumors, she's often the topic of water-cooler conversation, but never more so for San Franciscans than this week, which saw not one, but two shows at AT&T Park with her partner in crime, Jay Z. At least three people have told you that they could hear the concert from their house. And you probably already know that the cause was science. But what's more interesting than noise pollution is the whole marital spectacle of the On the Run tour.

Infidelity rumors have plagued the power couple for years, but the speculation around a possible breakup reached crescendo thanks to the infamous elevator footage of the Mortal Kombat-esque beatdown Solange administered to Jay Z, while her sister sentineled nearby. Because of the lack of audio and that bodyguard's confidentiality agreement, we will probably never know exactly what that was about, but it didn't take long for people to assume the kickboxing was inspired by cheating. It was an unusual crack in the perfect facade Beyonce and her team have maintained since the Destiny's Child days. But, instead of compromising her brand and this tour, the debacle actually brought more interest.

Of course, most attended these shows for the music, but there's also a sort of twisted voyeuristic schadenfreude at work here. Because of everything that led up to the tour, it began to feel like the final act of a great romance we've all been a part of in a strange parasitic way for years. We watched as they strutted their young love back in 2003 for Beyonce's debut single "Crazy In Love." We watched as she revealed her pregnant belly at an awards show. We watched them vacation and talk about utopia, Jesus, and Sade on a yacht. So it makes sense that we would want to be there for the undoing of all that romantic history. 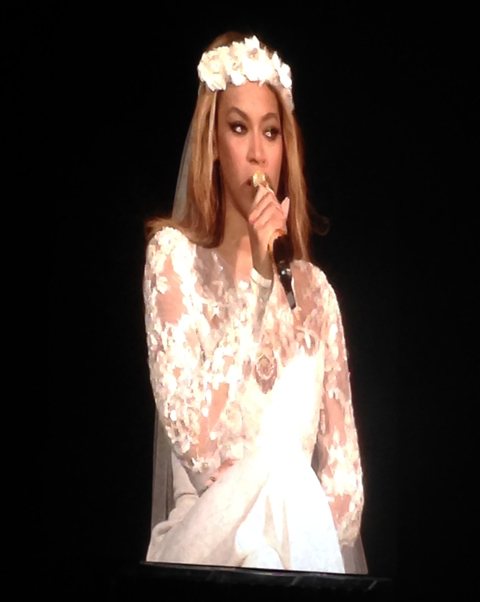 The tour's lights and video montages and pyrotechnics couldn't fully distract from the main event: taking a microscope to every choreographed interaction Beyonce and Jay shared on stage. Having attended both shows (YOLO), I had a lot of time to parse the body language and the main takeaway was that something is not right. Jay sidles up to hug Beyonce from behind at the end of "Drunk In Love" and Beyonce does her best not to recoil ("OMG, she hates him!" screamed two girls in front of me). Beyonce is a good actress, but she always lets a little something slip during these few interactions. And then there's Beyonce in a wedding dress fighting back tears while singing a song about a lying, trifling man from a 12 year relationship (the same time span as her courtship with Jay), or Beyonce borrowing Lauryn Hill's wounded "It ain't workin, it ain't workin" mantra from "Ex Factor," or Jay mournfully rapping  "I can understand why you want a divorce now" in "Song Cry." These songs are old, but the fact that they were specifically selected over countless others is noteworthy.
So all of this could mean two things. A. The rumors are true. They're only staying together to make bank ($100 million so far from this tour) before announcing their conscious uncoupling after the tour wraps. Or B. This entire divorce thing is part publicity stunt, part performance art. Messing with the idea of their marriage and family for profit would be a cynical move, but perhaps there are two marriages at work here, the one they live at home and the one they live for us on stage. Maybe they feel fine messing with our conception of them because, at the end of the day, we don't know them; it's all fiction. And what makes better fiction than a plot twist or a heartbreaking betrayal? As much as we are obsessed with happily ever after, we sure do get bored of it pretty quickly.

Maybe the fantasy they package and present to us holds no real value in their day-to-day reality; maybe they are just playing characters in a modern day opera, putting on the show they know we want to see. Certainly Beyonce and Jay Z, two of the most famous people on the planet, know how to manipulate the media and the rest of us by now. Would it be that surprising if they were savvy enough to create a narrative that would keep us interested, keep us buying $300 tickets, while they laugh all the way to the bank?