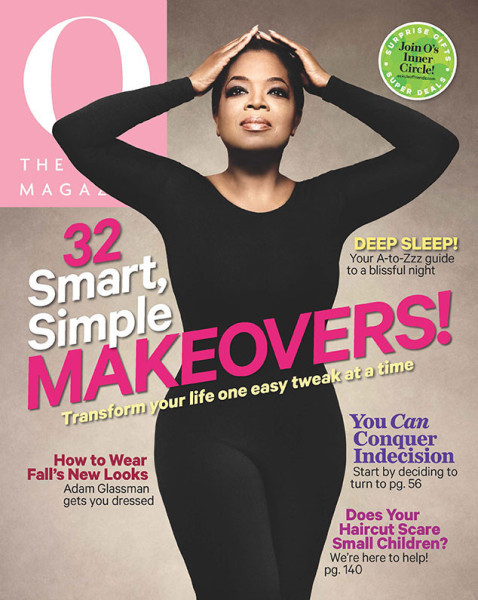 Each month, Oprah Winfrey poses for the cover of O, the Oprah Magazine — and each month, the media mogul stuns.

But the September issue of the magazine dons a picture of Winfrey on the front page like we’ve never seen her before.

Wearing a sleek, all-black Capezio catsuit, Winfrey shows off her curvaceous body as she stands tall with arms raised and head forward. The result? Striking.

“I feel phenomenal on this cover,” Winfrey said, according to E! News — however, the OWN creator did admit that she initially had reservations about casting her curves on the cover.

“I was a little apprehensive about doing this cover in a bodysuit because, as Maya Angelou says in her ‘Phenomenal Woman,’ ‘I’m not built to suit a fashion model size.’ But it’s like something I’ve never done,” the OWN creator said. “It’s really kind of exciting.”

But when she was in the moment, all doubts were gone, and Winfrey, like always, nailed it.

“I like pretending I’m a movie star,” she admittedly told E! News — and in doing so, many speculators observed that her sultry yet graceful pose channeled an iconic image of music superstar Diana Ross.

The cover also highlights the magazine’s “Makeover issue,” and inside, readers will discover stories, tips, and ways to improve their lives “one tweak at a time.”

“I’m a big fan of the kinds of minor changes that add up to major delight,” Winfrey said.

There’s no doubt that the billionaire boss looks every bit of fabulous, and we love that she’s embracing it.

The September makeover issue of O, the Oprah Magazine hits stands on Aug. 12.