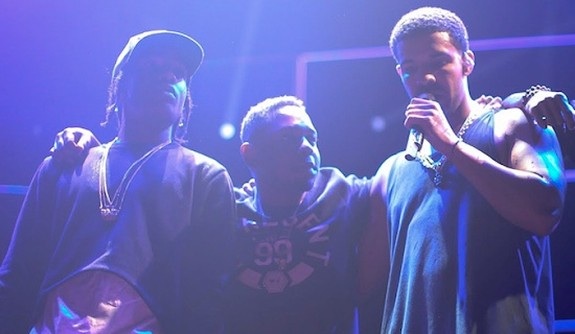 Now we can officially stop all of that talk about beef, bad blood — or, whatever you want to call it — between Drake and Kendrick Lamar. For a minute there, it seemed like things might never be the same between those two (after that “Control” verse) but on Monday night, Drizzy proved us wrong at OVO Fest.
Early in his set, Drake brought his “twin brother” J. Cole to the stage, and before saying goodbye, he took a moment to send some love to Kendrick as well.

“I wanna shout out my n—a Kendrick Lamar,” he told the crowd. “Kendrick was on my album, we went on tour…that’s one of the hardest n—-s alive. He should be standing right [here].”
“There’s a lot of kings in this sh–, so shout out to Kendrick and shout out my brother J. Cole.”
Maybe it wasn’t as “monumental” as Kanye showing up last year to squash rumors of tension, singing Drake’s praises, but it still felt pretty good to know that two of the most talented rappers in the game are back on good terms.
source
Drake Day is the day that just keeps on giving you guys!

grandmascorner and their efforts trying to get this submitted!