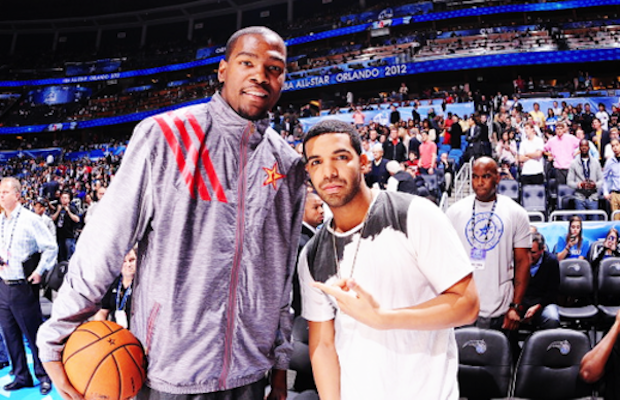 Durant was in attendance as Drake performed at OVO Fest in Toronto, and the singer finished off his performance with a shout out to the Oklahoma City Thunder superstar.

After his performance, Drake said: 'Before we leave, my brother Kevin Durant was kind enough to come to the show to watch. I just want to see what would happen if he played in Toronto.'

However, despite Drake's plea, Durant is highly unlikely to leave the Thunder in the near future and will not be available as a free agent until July 2016.

Drake is often in attendance at Toronto Raptors home games, and the only Canadian franchise in the NBA made it to the play-offs last season, where they were beaten 4-3 in the first round by the Brooklyn Nets.

The 25-year-old averaged 32 points per game during the 2013-14 campaign, the highest of his career, and helped Oklahoma City to 59 wins, second only in the Western Conference to the San Antonio Spurs (62).

The Thunder were beaten in the Western Conference Finals by San Antonio 402, and the Spurs went on to thrash the Miami Heat 4-1 in the NBA Finals to be crowned champions.

Durant joined the USA national team at their training camp in Las Vegas as they prepare for the upcoming FIBA World Cup, which begins in Spain on August 30.

Source
This generous man, he just keeps on giving and putting on for his city.