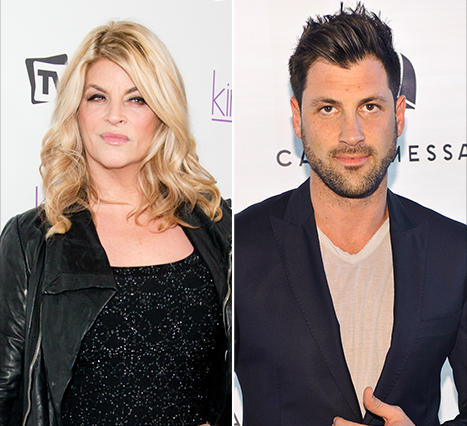 The feud between Kirstie Alley and her former Dancing With the Stars dance pro Maksim Chmerkovskiy took a strange turn on Friday, Aug. 1, when the Jenny Craig spokeswoman took to Twitter to relay an unusually extreme message.

"Dear Sir..after you have ass raped me there is really no reason to include 'I wish you the best'.. It's rhetorical," she tweeted.

The message came three days after the Ukrainian dancer appeared on Andy Cohen's Watch What Happens Live and discussed his now-strained relationship with Alley, with whom he memorably bonded during her 2011 DWTS stint.

"She stopped getting along with me," Chmerkovskiy admitted. "I think the world of her. I'm not judging people by their religion. I'm Jewish. I don't really believe in science fiction, whatever," he added in what seemed to be a reference to Alley's faith, Scientology.

According to the DWTS veteran, the actress took offense to Chmerkovskiy's new friends, although he didn't specify which "new friends" those might be.

"Now that I'm associating with other people, that she can't be associated with, I am no longer to be spoken with," he said.

A source close to Chmerkovskiy tells Us Weekly, "All he said was he wishes her the best. She is the one that stopped talking to him! He didn't say anything wrong."

Alley seemed to find her comment comical, tweeting, "To those who believe nasty gossip spewed by others, please stop following. To those who know me, carry on. I won't dignify any of your accusations with anything other than ADIOS. This tweet is for those of U who believe the Moon is made of cheese."