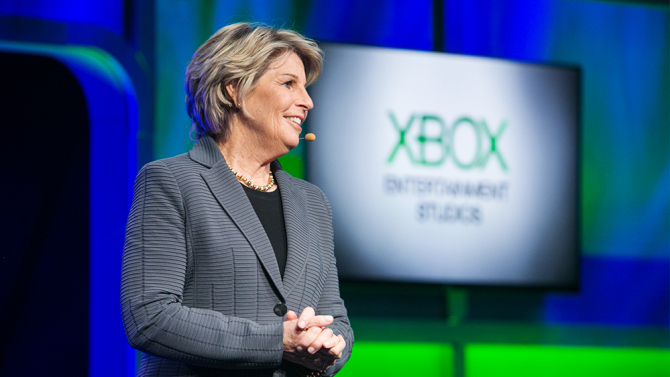 Microsoft is getting out of developing original series for its Xbox gaming platform and will close Xbox Entertainment Studios in the coming months.

The tech giant made headlines Thursday with plans to layoff as many as 18,000 employees following its recent $7.2 billion acquisition of Nokia’s phones business.

Xbox chief Phil Spencer announced Xbox Entertainment Studios will shutter and that some projects in development and production, including a live action “Halo” series, will still be produced. Variety reported early Thursday that a shift in strategy was coming at XES, given the overall corporate restructuring at Microsoft.

Move comes as newly appointed CEO Satya Nadella is taking a hard look at all of the company’s operations and is questioning the plan to produce a broad slate of original series for Xbox platforms.

Microsoft recruited former CBS exec Nancy Tellem (pictured) in the fall of 2012 to lead the Santa Monica-based Xbox Studios division, which was tasked with developing programming based in part on Microsoft videogame franchises such as “Halo.” Nadella is looking to focus the company’s resources and energies into its core software, Internet and videogame businesses.

Tellem, Jordan Levin and some of the Xbox Entertainment Studios team will remain with the company to see the completion of its original programming already in production, Microsoft said. That includes a live action “Halo” series, the first major project spearheaded by the division, that’s in advanced negotiations for a pickup at Showtime in a shared window with Xbox. Project is a co-production with Amblin TV.

Others are the live action digital series “Halo: Nightfall,” a prequel story exec produced by Ridley Scott that will introduce a key character in the next “Halo” game, and the docu “Signal to Noise,” about the notorious Atari “E.T” game flop in the early 1980s.

Xbox Studios also produces elaborate companion material for NFL games and other “entertainment experience” apps for Xbox, and that work is expected to continue.

Levin, the former CEO of The WB network and Generate, a production studio and talent management company, joined Tellem’s team in February as executive VP to oversee the company’s original projects.

In April, Tellem and Levin promoted six greenlit shows and at least 11 more in development at the NewFronts, a gathering of online networks and digital programmers seeking advertising dollars from Madison Avenue. The series were the first of a slate Tellem developed over the past two years to show how the exec planned to help the Xbox One become more of an all encompassing entertainment platform.

But that slate is now being considerably trimmed as part of the new mandate from Nadella, a 24-year company vet who was appointed CEO succeeding Steve Ballmer in February.

In a blog post on Thursday, Spencer added: “Microsoft is the productivity and platform company for a mobile-first and cloud-first world, and games are the single biggest digital life category in a mobile-first world.  Success in this category, by growing a robust Xbox business, brings additional value to Microsoft. I have stated this before, but for Xbox to be successful, we must remain committed to being a consumer-driven organization with the mission of meeting the high expectations of a passionate fan base, to create the best games and to drive technical innovation.”

Microsoft made a big push to promote its games lineup at this year’s E3 videogame confab in Los Angeles, in May, touting a commitment to focus on games as a way to sell more Xbox One consoles.

“I would like to take this opportunity to recognize the accomplishments from the entire team in XES,” Spencer said. “They have built an impressive slate of original programming and pioneered interactive entertainment on Xbox … Change is never easy, but I believe the changes announced today help us better align with our long-term goals.”