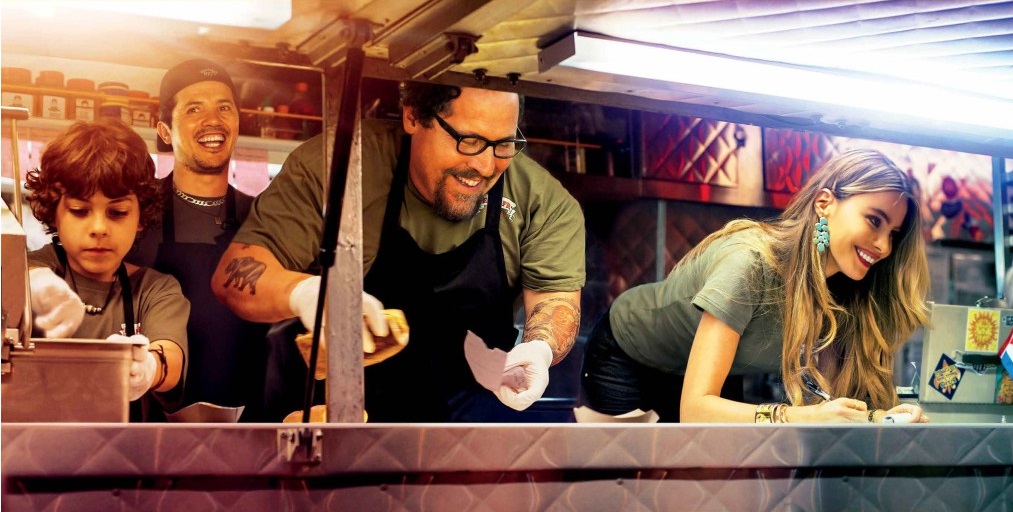 With a personality as flavourful as his career, Jon Favreau has been a firm favourite for as long as I can remember. The 47 year old actor-turned-director was the saving grace of Couples Retreat; added light relief whilst leveling the overall tone in the Iron Man series (which he both acted in and produced); and has harked back to his indie roots in his latest release, Chef.

So, when Shadow locked was offered time with the iconic actor/director/producer, you’d of been hard pushed to find someone with more of a genuine passion for an interview. Unfortunately though, the PR in question didn’t agree.

Perhaps there were hungrier, more delicious invites for Mr. Favreau, or maybe it was decided that our entree sized application wasn’t worthy of the films mighty appetite. Whatever the case we missed out...and to this day I’m upset.

However, ever the professional I refused to let our rejection bitter my passion, instead deciding to view the film as an independent with strong foodie undertones rather than as a work-focused film journalist; and now, having had time to let its performance digest and my thoughts to settle, I’m glad I did.

From the outside Chef would appear to be a directors passion project, one that incorporated both an intrinsic love of food and an impressive back catalogue of celebrity friendships. And yet, when all has settled and one thinks back to the 115 minutes of culinary bliss, a number of deeper - and far more meaningful messages - begin to surface.

Don’t believe me? Well, go grab yourself a Monte Cristo (or other kingly sandwich), kick back and allow me to blow your mind with five simple points...and a handful of food-puns:

Find what makes you truly happy and go for it

Without revealing too much Chef’s lead protagonist, Chef Carl Casper (ala Jon Favreau) is unhappy. His position is castrating his creativity; he’s lost sight of what’s really important to him and, worse still, his passion is taking a backseat to salary. Ultimately, his work/life balance is off, and no amount of bravado can hide this fact.

And so, following an unsavory review, a social media call-out and his boss’ persistent demands to remain consistent and respectful of their current menu, Chef Casper snaps, venting rage that has been building for some time.

Following some persuasion, Carl heads back to his roots, his love, and buys a food truck in which to reignite his passion, with little to no capital at his disposal. However, when Carl’s sous chef come El Jefe partner Martin asks him how he feels, his reply is priceless: “I’m broke, but for the first time in as long as I can remember I’m happy” - a line that speaks volumes.

So…the choice is yours. You can accept that bland admin role, taking your basic 18k salary and settling into a life of ambiguity and fruitless reward; forever fighting off the ‘what ifs’ with alcoholic weekend binges and pedantic excursions. Or, you can take a risk...you can discover what it is that truly makes you happy and go for it, no matter what. Remember:

“Give a man a job he loves, and he will never work a day in his life” (Confucius)

Thanks to the innate technological know-how of Carl’s 10 year old son Percy (Emjay Anthony), El Jefe becomes a social media phenomenon. RT’s and geo-location tags became synonymous with the food wagons success, much to the bemusement of Carl; and it’s something that all graduates should take heed of.

Sure, social media can be an outlet - well, outlets - for one to waste hours on pointless drivel, but ignore it at your peril.

Used correctly, however, and the likes of Twitter, Facebook and LinkedIn (especially) can provide outlets of advertisement for you, or any business venture you may be undertaking.

Conversely, ask yourself - what would a potential employer like to see? How can you catch - and hold - someone's attention long enough for them to gain a vested interest in you ( off the top of my head perhaps throw a vine collage together, or produce likeable - yet targeted - articles via a blog and share across LinkedIn/Facebook/Twitter?). Most importantly though, make your web-based presence felt. Tweet in the right directions, keep a polished LinkedIn profile, and make sure what you’re presenting is what you want them to see.

Eric Qualman, public speaker and author of Socialnomics, once said: "We don’t have a choice on whether we do social media, the question is how well we do it”.

So… it’s time to assess your digital profile.

Remember your place, but don’t let people walk all over you

The core of Chef’s plot revolves around Chef Carl Casper’s colourful outburst towards food critic Ramsey Michel...one that is recorded on numerous phones before subsequently going viral on social media sites such as Youtube.

However, Carl’s outburst provides a great lesson for recent graduates, or just those new to the job market. While you will be expected to take a lot of crap because of your position, age and inexperience, never allow your tenuous position to become one of slavery.

Too often do I see young, fragile office temps, account executives - or any other junior based role - walked all over. Heck, I was once asked to iron an editors shirt on an intern-ship. But fear should not allow mistreatment - when push comes to shove you’re still the same, vertical based homosapien. Hard work should be recognised, and if the balance starts to shift to one of a ‘senior’ position exploiting either you or your hard work...speak up. Make yourself known - firmly, politely, and of course, confidently.

More often than not it’ll show strength of character, and will be respected. However, worse case scenario, you lose your job because of it. But then ask yourself...how great of a job was it really? Mistreatment and a lack of respect...next!

Jon Favreau's comedy will be served up on Blu-ray this August.

As previously reported, Universal and Open Road Films will be releasing 'Chef' on Blu-ray, and now the date has been set for August 19.

When Chef Carl Casper (Favreau) suddenly quits his job at a prominent Los Angeles restaurant after refusing to compromise his creative integrity for its controlling owner (Dustin Hoffman), he is left to figure out what comes next. Finding himself in Miami, he teams up with his ex-wife (Sofia Vergara), his friend (John Leguizamo) and his son to launch a food truck. Taking to the road, Chef Carl goes back to his roots to reignite his passion for the kitchen and zest for life and love.

Supplements have yet to be revealed, but the Blu-ray/DVD/Digital Copy combo pack will feature lossless audio and will have a suggested list price of $34.98.

Finally saw this movie today and I loved it. I highly recommend it.