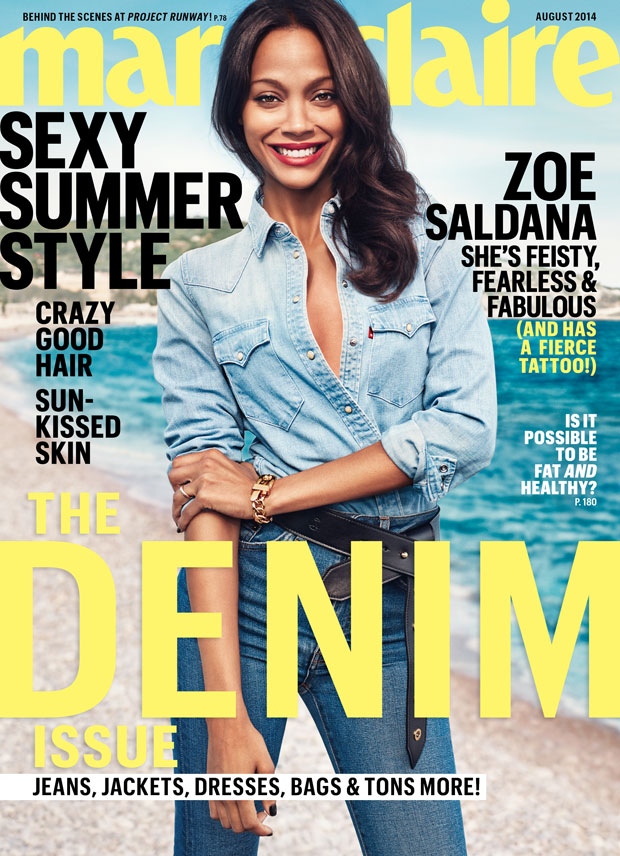 Zoe Saldana ia dishing some pretty good relationship advice in the August issue of Marie Claire magazine. The Star Trek actress broke up with her boyfriend of 11 years in 2011 and started an on-again, off-again thing with actor Bradley Cooper that nearly lasted a year. After breaking up with Bradley for good in 2012, Zoe married Italian artist Marco Perego after a few months of dating in 2013.

Yeah, it was a whirlwind romance, but Zoe says she’s the kind of girl who follows her heart and just knew Marco was “the one.” She also advises others not to settle, revealing she had to walk away from a relationship where she was being disrespected by an ex.

She also reminds us, past flames who don’t belong in our lives are called an “ex” for a reason.

come talk about your relationships, ontd

On her relationship with husband Marco Perego: “I don’t do the ABCs. I do what my heart says, what my heart feels. So from the moment

I met my husband, we were together. We knew.”

On the biggest thing she’s learned about relationships: “Not to settle. If you’re not happy with a person, leave. And wait until you find that one person who makes you feel good about yourself every single day and is not expecting you to change, but to grow.”

On disrespect: “I have been in relationships where a man has disrespected me, and I don’t need to be friends with that man anymore. I don’t want to be the one going, ‘I’m cool, because I’m friends with all my exes.’ There’s a reason why you’re called an ex. I crossed you off my list. Moving on. You cross a line, you need to know that you’re going to walk this earth knowing that there’s an individual who has no respect for you.”

On dream roles: “I would love to play Nefertiti or Cleopatra or the Queen of Sheba. We preserve more male history than we do female. We have to preserve it. No more complaining. We have to do it.”

On growing up in Dominican Republic: “I had many female bullies growing up who wanted us to be submissive and to follow and to kiss ass, and that’s the last thing any Saldana will ever do, honestly.”