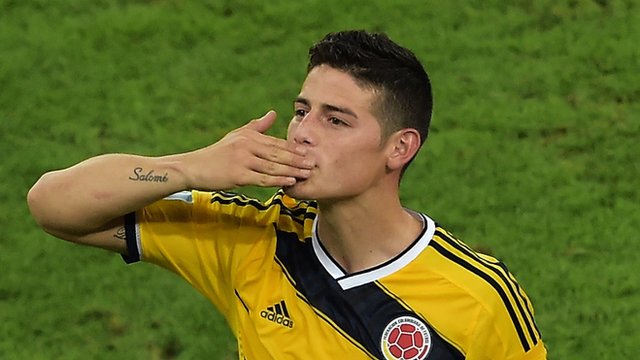 Having thrust himself into the spotlight with a Golden Boot-winning performance at the World Cup, the Colombian star now looks set to trade Monaco for the Santiago Bernabeu.

After setting the World Cup alight with an unrivalled six goals in just five games, James Rodriguez is perhaps the most in-demand player in European football this summer.
Fittingly, Champions League winners Real Madrid seem intent on adding the Monaco man to their already impressive array of Galacticos, and are currently clear favourites to seal his signature.
With Los Blancos reportedly already in negotiations over a proposed €70 million (£55.5m) move, the Colombian looks likely to achieve his "life dream" of moving to the Santiago Bernabeu.
However, not content with already adding Luis Suarez to their line-up, Barcelona are supposedly attempting to gazump their bitter rivals for their primary transfer target, although they remain outsiders to succeed in turning his head. Aside from the Spanish heavyweights, a number of the continent’s biggest clubs have been linked with the talented 23-year-old, who now seems certain to have played his last match at the Stade Louis II.
Fellow Ligue 1 billionaires Paris Saint-Germain are on offer at to convince the World Cup Golden Boot winner to defect to the French capital, while Bayern Munich are also priced at to bring him to Germany.
Premier League big spenders Chelsea, Manchester City and Manchester United are also available at to tempt the former Porto man to England, although each seem focused on other targets.
Having already brought Alexis Sanchez to the Emirates this summer, you can get odds of on Arsenal sending their fans into dreamland by adding another South American World Cup star to their increasingly promising squad.
Meanwhile, Italian champions Juventus are also rated at to reinvest the money that could be coming their way for Arturo Vidal on Rodriguez, a statement of intent for an ailing Serie A.