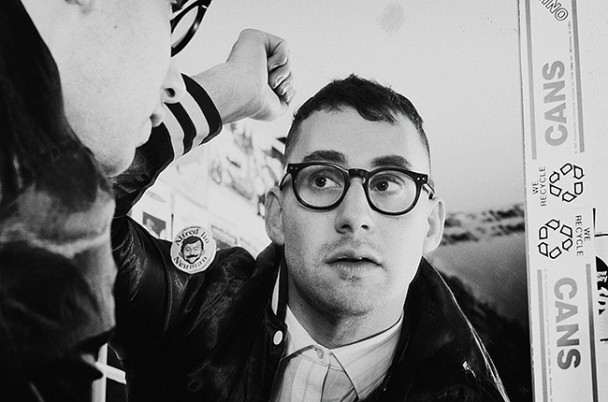 "The only way to get back to the golden age of music isn't to make a "fuck-you" record that 11 people hear."

In TIME’s new profile of Jack Antonoff, the Bleachers mastermind and fun. guitarist spoke about recruiting some of his biggest influences to give his new album, Strange Desire (out July 15), a sound that was both nostalgic and futuristic at the same time.

But the 30-year-old says his biggest influence wasn't the sound of the 1980s, but actually the attitudes toward music in the 1990s — an era when it wasn't uncool to want to write big, unapologetic anthems for the whole world.

“In the 90s, you had Nirvana and Pearl Jam, and these bands were amazing and changing culture and music but weren't on this, ‘Fuck you, we don’t want to be big’ kick that happened in indie music in the early 2000s, which I hate,” he says. “The only way to get back to the golden age of music isn't to make a fuck-you record that 11 people hear, [a record] that’s brilliant and makes the most underrated albums list on every website. It’s to get in there.”

Antonoff says a horrible bout with pneumonia two and a half years ago taught him a lot about the power of pop music. After spending six days in the hospital without hearing any music (“You probably can’t remember the last time you didn't hear music for six days,” he says), his mom brought him an iPod, and he put on “Hang With Me,” a song by Swedish pop star Robyn that instantly brought him to tears.

“The lyrics were so beautiful,” he says. “I’m listening to this song right now that people are probably fucking to in Ibiza and raging to in Brooklyn, and I’m in a hospital after a near-death experience crying to it. That’s music. That’s pop. You could cry. You could dance. It services all these emotions.”

Everything he's released so far has been really good. Excited for the album.