Maradona says Messi won the Golden Ball because of 'marketing' 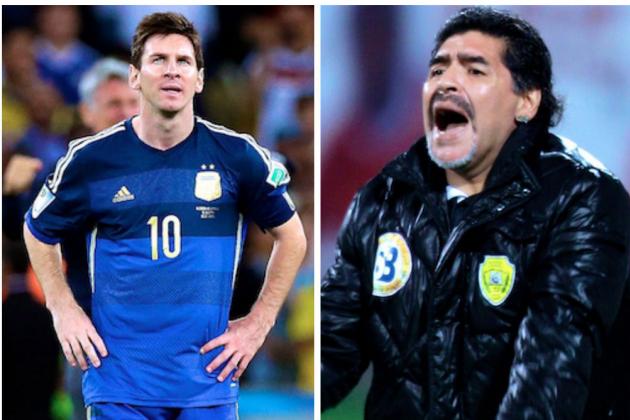 Lionel Messi capturing the Golden Ball as the best player at the 2014 FIFA World Cup is a dubious distinction for some. Many believe Messi's tournament was merely average, culminating in a largely indifferent performance during the 1-0 defeat to Germany in the final.

Among the detractors is Argentina legend Diego Maradona. The man with whom Messi is most often compared has blasted FIFA for the award, per a report in The Guardian. Speaking on Latin American television station Telesur, Maradona dismissed Messi winning the award as a business move from FIFA.

"Messi? I would give him heaven if possible," Maradona said. "But it’s not right when someone wins something that he shouldn’t have won just because of some marketing plan."

Those are fairly scathing words from the man who inspired Argentina to World Cup glory in 1986. They are particularly noteworthy because of the intense pressure on Messi to emulate Maradona every time he plays for his country.

The two players have often merited direct comparison for more than just their nationality. They both play a similar style, using control so close it defies all logic to consistently baffle defenders.

Like Maradona, Messi generates excitement and expectation every time he receives the ball. No other player in today's game boasts his knack for tricking past the opposition at speed and finding the net.

However, there's no escaping that. As good as Messi has been for club side FC Barcelona, he's never produced what Maradona did internationally.

Messi was exceptional at times during this World Cup. He particularly thrived during the competition's early stages.

He bagged four goals in group matches and was too much for Belgium in the quarter-final. The latter performance made many believe Messi was finally ready to merit his comparisons with Maradona, per BBC Sport writer Ben Smith:

This performance was not on the same level as his predecessor's the last time these two nations met - in the semi-final in Mexico City in 1986 - but it was more than good enough to draw parallels from all corners.

The image of Messi wriggling away from five Belgians to win a first-half free-kick on the edge of the penalty area brought echoes of that iconic image of Maradona on the ball in 1982, with six Belgians wondering what to do.

However, Messi meriting consideration as one of football's all-time greats still hinged on a winning performance in the final. Writing for The Telegraph, Alan Hansen dubbed the final perhaps Messi's "last, and best, chance" to prove he belongs alongside Maradona and the greatest ever.

Of course, Mario Gotze's winner in extra time for the Germans means that chance has now passed. But it would be churlish to claim Messi didn't have his moments at Brazi's famous Maracana Stadium.

He was certainly his country's most dangerous player during an eventful first half. However, his fortunes altered after the break.

Messi missed two excellent chances, opportunities he would usually take. Maybe that is the ultimate difference. An all-time great seizes those chances, slots them away and takes a place in history.

Although Messi continued to try and escape close German attention, he could never quite get free. The sight of him receiving the Golden Ball was a strange one after such a subdued performance late on. 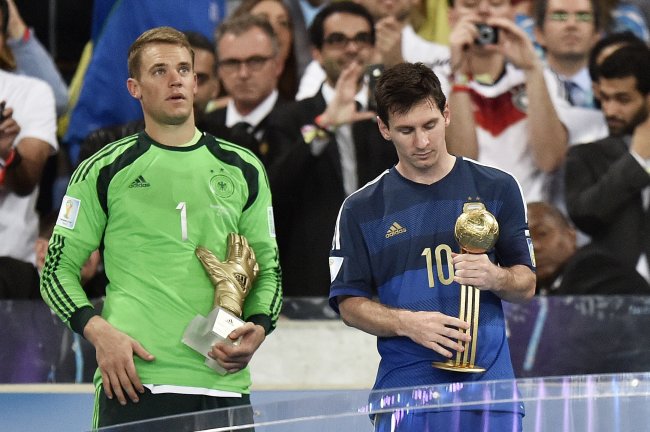 But Messi wasn't the only Argentine figure to receive scolding words from Maradona. The country's football icon was less than impressed with Sergio Aguero's efforts, per the same report in The Guardian.

"I don’t understand the substitution of Lavezzi. He was phenomenal down the wing," Maradona said. "Kun Aguero didn’t have the same impact. It was not his tournament."

In this instance, Maradona's words are entirely justified. Aguero was indeed dire. Yes, the Manchester City striker was not long back from injury, but it's difficult to remember him performing as abjectly as he did during the final.

Meanwhile, Lavezzi had been a consistent menace in the early stages. However, coach Alejandro Sabella shouldn't be blamed for trying to freshen up his attack as the game wore on.

Ultimately, it's Maradona's words about Messi and the Golden Ball award that will have the most impact. They will serve as the most obvious indictment of a magnificent player who is still leaving fans wanting at the international level.

And unless Messi is able lead Argentina to a World Cup title during his remaining days with the national team, Maradona's remarks will continue to carry significant weight.

Open to: All, detailed results viewable to: All. Participants: 361

Who should have won the Golden Ball for you, ONTD?