In regards to that nonsense from the other day... 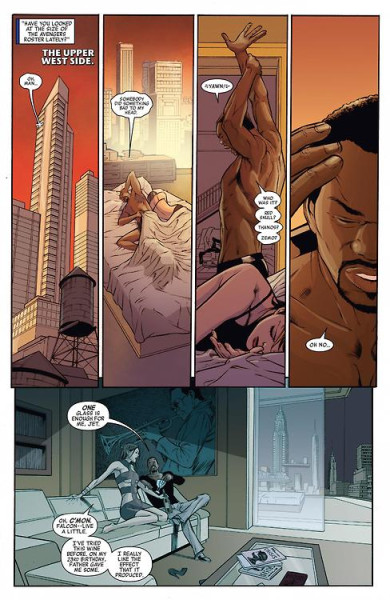 “On the Internet, sometimes what appears to be an explosion is really just a fart. The accusations are totally without merit. A handful of people who have it in for Rick started a witch hunt against him, claiming he had written a scene in Captain America #22 that portrayed the Falcon engaging in what amounted to statutory rape. They used social media to spread the word, and we got some angry emails — about 90 percent which came from people who stated right out the gate that hadn’t even read the issue, but were incensed by what they’d heard Rick had written.

Let me be clear: An attack on Rick’s integrity is an attack on Marvel’s integrity. We would never publish a scene that had one of our super heroes engage in such an act. Jet Black is a 23-year-old woman. She was a pre-teen at the start of Rick’s run, but since that time, the book has jumped forward 13 years in the future, and Jet — along with Steve and Ian — has aged 13 years. In Captain America #22, it is explicitly stated that Jet is 23, and she is rendered [by artist Carlos Pacheco] as a fully adult woman. Jet Black is a 23-year-old woman. End of story.”

– Marvel Editor-in-Chief Axel Alonso, talking with Comic Book Resources about the social-media firestorm that followed the release of Captain America #22