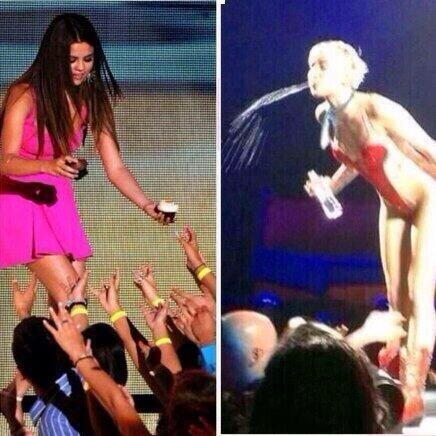 Miley Cyrus' "Bangerz Tour" special draws an abysmal rating for NBC Sunday night.
Tour specials and artist profiles often struggle to draw ratings on network television, but few perform as badly as NBC’s Miley Cyrus feature did Sunday night.
Entitled “Miley Cyrus: Bangerz Tour,” Sunday’s two-hour spotlight drew a mere 1.4 overnight household rating. Adults 18-49 and total viewership numbers will not be available till around 12PM ET, but they will surely look as bleak as the overnight household number.
The special kicked off with a 1.7 from 9-9:30PM before dropping to a 1.5, 1.3 and 1.3 in its subsequent half hours.
While Cyrus has drawn on network television before–her initial “Two and a Half Men” guest turn performed well for CBS–she was glaringly unable to move the needle for the special look at her racy “Bangerz Tour.”