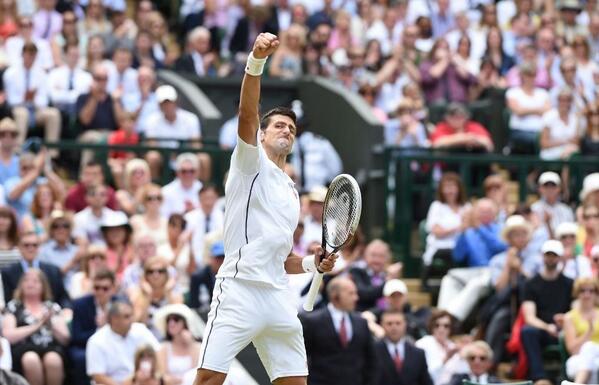 After letting a championship point slip in the fourth set, he won Wimbledon's first five-set final since 2009.

Djokovic had lost his previous three major finals, and will now reclaim the number one ranking from Rafael Nadal.

Federer, 32, had hoped to surpass Pete Sampras with an eighth title and become the oldest winner in modern times.

The Swiss was willed on by much of the 15,000-strong crowd throughout the final, with chants of "Roger! Roger!" ringing around Centre Court when he came back from 5-2 down in the fourth set.

But Djokovic recovered his nerve to fend off break points in the decider and clinch a dramatic win after three hours and 56 minutes, before kneeling on the turf and eating some grass - just as he had done after winning in 2011.

He then headed into the stands to celebrate with his team, including three-time Wimbledon champion Boris Becker, brought in by Djokovic at the start of the year to help end his run of 18 months without a major win.