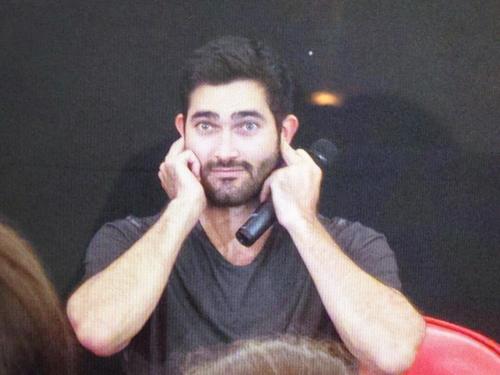 Tyler Hoechlin was asked about Sterek at the Teen Wolf Con in Paris yesterday and this was his response:

Q: "Do you ship Sterek? It’s Stiles and Derek."

Tyler: "Oh, Sterek! Uhm, I will say this, and I mean, I know, I’m glad you guys actually… Because I wanna say, I know that’s like a big, like, a fan fic thing, I know that everybody, kind of, kind of, everybody talks about that.

So because it doesn’t have anything to do with that… I guess I don’t have any thoughts on it, because, it’s… to me… It’s those characters are their own people… Uhm.. And, so it’s, it’s not a, it’s not disrespect, it’s not anything like that. I understand, I don’t personally understand… It… Completely. Um, I appreciate it. [laughter] You guys do what you wanna do. But to me it’s just like, I see the characters for who they really, actually are in the show, so it’s nothing to do with the work that I do. So that’s the only reason why I don’t really think about it.”