Carlton and me. Besties! pic.twitter.com/S2BhBpe6Vk

Hanging with @BaileyJayShow at the Compound 4th of July party. pic.twitter.com/q7dmJq9490

In the wake of his firing from SiriusXM for a long string of racially charged tweets, Anthony Cumia went one further and deleted nearly every tweet he’s ever sent.

Days ago, Cumia went on a long Twitter rant against a black woman who allegedly hit him, calling her a “cunt” and expanding his rage against her to encompass all black people. Read one tweet: “The automatic jump to violence in that community is astounding. No discussion. It’s start punching at the least little thing. Uncivilized!!”


Cumia, a rabid tweeter notorious for grumpy conservative tweets, appears to have deleted not just the contentious tweets, but also nearly every tweet he’s ever sent. The only tweets currently appearing on his account are from between January 19th and 20th of 2014 — and, ironically, it was Martin Luther King Jr. Day: 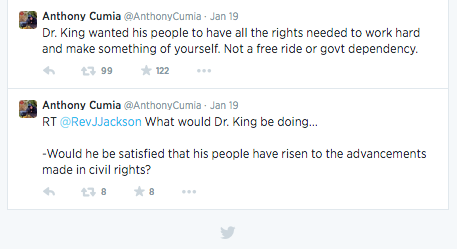 is he fucking trolling us with this i-have-black-friends bullshit?