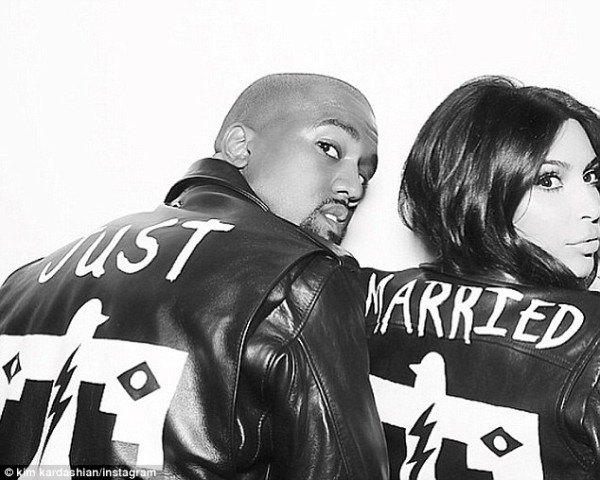 They tied the knot in a glittering ceremony in Florence, Italy, a mere matter of weeks ago.

And while it's no secret that Kanye West had a long-term crush on Kim Kardashian for years, he has now revealed the true extent of his almost decade-long obsession with his now-wife. The 37-year-old rapper halted his performance at London's Wireless Festival on Friday night to launch into a rant about discrimination within the fashion industry.

But the Yeezus star also offered a glimpse into his romantic side, revealing he first proposed to the 33-year-old reality star some seven years ago - five years before they finally turned their friendship into a relationship in 2012. Addressing the crowd in a bejewelled mask, Kanye said: 'F**k saving face and what it's supposed to mean, it's about living my dream.

'I told Kim seven years ago I would marry her and I made it happen. I just wanted to make something awesome and be awesome and change the world, and that's exactly what I plan to do.' Kim and Kanye, who raise one-year-old daughter North 'Nori' West together, were friends for many years before they found romance, with Kanye previously admitting he fell for the raven-haired beauty back in 2006.

Speaking during an appearance on On Air With Ryan Seacrest last year, he said: 'I just knew I wanted her to be my girl for a long time. I remember I saw a picture of her and Paris Hilton, and I remember telling my boy, 'Have you seen that girl Kim Kar-dijon?'"

The rap mogul's revelation came after he was booed by festival goers for halting his Wireless performance for 20-minutes to launch into an epic rant.

He told the audience: 'I'm not going to mention any names but... Nike, Louis Vuitton and Gucci. Don't discriminate against me 'cos I'm a black man making music.'


And it would seem the move didn't go down too well with the crowd, with audience members reportedly deserting the al fresco gig in droves.

One festival-goer told MailOnline: 'He was laying into the 'machine' and ranting about the public's perception of him. Hundreds of people left the park early because they were so bored of his long rant. 'There was serious booing towards the end of the speech, as people got so fed up and just wanted to hear him perform.'

Some fans also took to Twitter to express their annoyance at the fact that the superstar rapper halted his performance to get on his soapbox.

One wrote: 'Serious booing during Kanye's obligatory 15 minute Runaway rant at Wireless. Just get the f**k on with it mate. (sic)'

Another added: 'There is a time and a place to get on your soap box @kanyewest and #wireless is not the place.'

While one said: 'Kanye West getting boos at wireless, for ranting on stage instead of rapping.' Kanye - husband of Kim Kardashian - was the headline act at Friday night's Wireless, which also saw the likes of Pharrell Williams, Foxes and Ella Eyre take to the stage. The star is now also headlining the music event on Saturday night after Drake was forced to pull out due to illness.

The Hold On We're Going Home hitmaker released his own statement which said: 'To my beloved fans, it truly breaks my heart that I won't be able to perform as planned at Wireless and Roskilde this weekend. 'I got sick a few days ago and although I am on my way to bouncing back, my doctors have made it clear that I am not physically fit to fly or deliver the performance my fans expect and deserve from me.

'I will be focused on resting for a quick recovery. I have the best fans in the world and I can't wait to come back to make more incredible memories together.'

The festival, which previously enjoyed several successful years in Hyde Park, will this year span two sites V Festival-style - one in Birmingham and one in London.

MailOnline has contacted a representative for Kanye West for comment.