Just In: Neymar has fractured vertebrae. Out of the World Cup 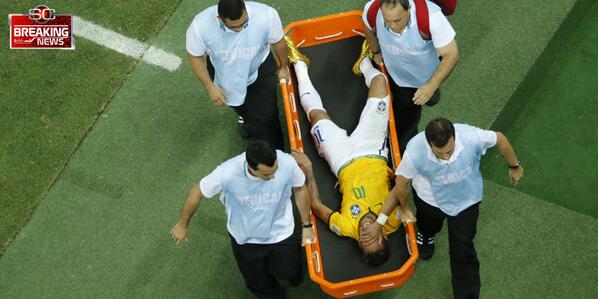 Brazil's team doctor says Neymar will miss the rest of the World Cup after breaking a vertebrae during the team's quarterfinal win over Colombia.

Neymar was kneed in the back by Colombia defender Juan Camilo Zuniga in the second half of Brazil's 2-1 win, and was in tears when he was carried off the field on a stretcher.

He was taken to a local clinic and team doctor Rodrigo Lasmar said after the match that the star striker had broken his third vertebrae.

Neymar is the Brazil's biggest star and has scored four goals for the team so far in the tournament.

Brazil plays Germany in the semifinals on Tuesday.

Fans & media gather outside the hospital where Neymar's being treated for what's reported to be a broken rib pic.twitter.com/OKV8xrxzh8